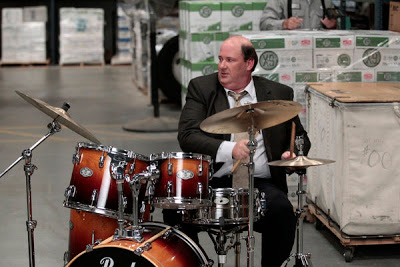 I’ve always been a fan of Pam and Dwight’s weird little friendship, so these past couple episodes of The Office that have highlighted that have really worked for me. In fact, last night’s episode, “Pam’s Replacement”, was probably one of my favorite post-Carell episodes.

Most of the episode centered around Pam feeling that Jim, along with everyone else in the office, was lying to her. Jim wouldn’t admit that the temp she was training to take over for her during maternity leave was attractive, and she was sick of everyone in the office treating her differently and acting as though she looked so sexy nine months pregnant. It was nice to see Pam depicted this way, since I think pregnant ladies on sitcoms so often fall victim to the over-emotional stereotype. Pam is still Pam, and she knows what’s up. And she knew the only person who was still being honest with her was Dwight.

Pam enlisted Dwight to help her prove that Jim thought the new girl, Cathy, is attractive. But somewhere along the way it stopped being a funny joke to play on Jim and started being a little more serious. Pam wondered why Jim had made Cathy laugh so much, and Dwight got way too caught up in proving Jim a liar using a blood pressure test at the local drug store. He thought Jim was lying about everything, but in actuality they discovered that Jim has high blood pressure. It was a surprising way to end the storyline, but it was also one that highlighted just how much Jim and Pam love each other. Pam immediately forgot about Cathy and was just worried about losing Jim.

Meanwhile, when Robert California crashed Andy, Darryl and Kevin’s jam session he completely overtook it by inviting a bunch of other musicians to join in. Darryl ended up on the tambourine, Kevin on the fish (does that instrument have another name?) or poor Andy had to play percussion on his stomach. It was an unexpectedly funny storyline to watch the guys get forced out of their own band while being unable to do anything about it. There wasn’t much to the storyline, but I still found it effective and funny.

Here are some of my favorite quotes and moments from “Pam’s Replacement”: