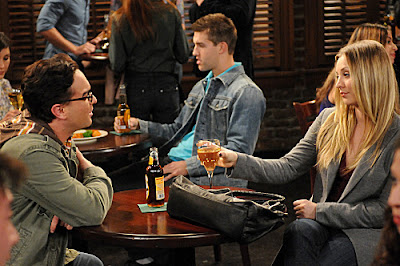 You guys! I have Ornithophobia! No seriously, I have a crazy fear of birds but never knew what it was called. And I was cracking up during last night’s episode of The Big Bang Theory because I have never related more to Dr. Sheldon Cooper. (And, sadly, I have seen myself in a few of his other idiosyncrasies over the years, yet I’m not a physics genius. Or any kind of genius. Not even an Apple genius.)

And maybe it was because I could see myself doing everything that Sheldon did had I been in that situation that I ended up with a much more positive feeling about the episode than some other TV critics seem to have. But y’all, I just found everything he did to be so hilarious and perfect! Everything from Sheldon’s imitation of a cat to his request for Bernadette to “flush it down the toilet” had me heartily laughing out loud. Because I loved this storyline so much, and the Penny/Leonard story was so strong, this ended up being a great episode for me. Seriously, I loved it.

Now even if you didn’t find Sheldon vs. Bird as funny as I did, I don’t think anyone could complain about the storyline that saw Leonard and Penny trying to hang out alone as friends for the first time. Leonard has so often been underused on this show, so it was nice to really see him shine here. First he and Penny went to the movies. It was a non-date and since he wasn’t trying to get sex, Leonard actually asserted himself. He made Penny see the movie that he wanted to see instead of the latest Jennifer Aniston flick, and he made her pony up the cash for her ticket and, later, her own order of fries. No more eating the good, crispy ones from his basket that he saves for the end!

Things fell apart for the two when Penny started talking to a cute guy and ditched Leonard. Just because they weren’t on a date didn’t mean this wasn’t rude. You don’t leave your friend at the table alone while you go flirt with someone else! But since Penny was busy hitting on a better looking version of Leonard, he was forced to go interact with the opposite sex as well. When Penny’s dude left, she came and found Leonard. Again, rude. Jealousy got in the way, and they ended up insulting each other back and forth until the girl Leonard was talking to bailed. The two tensely went home, but by the time they’d climbed all the stairs they realized that, at the very least, the first half of their non-date was fun. The fact that Penny was kind of into the new, more assertive Leonard (even though he couldn’t keep his needy desperation at bay long enough to put sex back on the table) seems to be setting up a reunion for these guys. After all, Penny was pining away for Leonard the whole time he was dating Priya – that’s how she ended up in bed with Raj. Personally I do want to see these guys back together again, but with a few changes. The way they ripped on each other in this episode revealed the flaws in their relationship – Penny thinks Leonard is a nerd, Leonard thinks Penny is dumb. They need to find those aspects of each other endearing, and not use them to feel like each one is better than the other.

What did you guys think of “The Ornithophobia Diffusion”? Was the bird storyline hilarious or literally for the birds? Do you think Penny and Leonard should give it another shot? And as always, here are some highlights from the episode:

The Big Bang Theory: For The Birds
https://haligonia.ca/the-big-bang-theory-for-the-birds-48381/