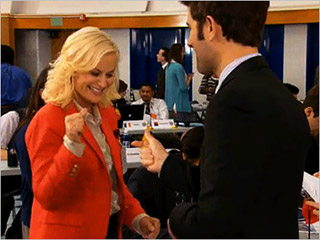 I’m pretty sure I need to re-watch last night’s episode of Parks and Recreation because I missed stuff by laughing so hard. Few things are funnier than when Leslie Knope goes full-on lunatic, and that’s exactly what she did while running a high school Model UN last night. Seriously, I’m pretty sure I could just post a transcript of the episode in my favorite quotes section.

One of the things I hated about high school (and like most people, there are many) was that we didn’t have a Model UN. We had Model Parliament, which was incredibly lame and not in a fun, nerdy-lame kind of way.

The Model UN meant that Ben and Leslie would have to spend some time together, something we know Ben isn’t super OK with. And when Leslie left him high and dry so she could go do a photo-op for her city council campaign, Ben got mad. I mean, it’s bad enough that Leslie broke off their relationship for her campaign (which, at the time, he was OK with) but to bail on Model UN? That’s criminal! (Please insert your own joke about The Hague here.)

Ben made a decision without waiting for Leslie, so her nation of Denmark declared war on his nation of Peru and all hell broke loose. The students were no longer trying to solve a world food crisis, but were instead trying to wage the world’s stupidest war. Ben got Leslie/Denmark condemned by the UN (complete with a mic drop – awesomesauce) and Leslie teamed up with Botswana and The Mood (April, natch) to take them on. Best line of the night might be Leslie yelling “Yeah! We got the freakin’ moon! What are you going to do without tides, Peru?”

So basically Leslie and Ben ruined Model UN (and thus broke the heart of a teenage Leslie Knope In Training), but they managed to make things right by offering to host a bigger, better, less chaotic Model UN at the city council chambers. And then they gave everyone pizza. Leslie and Ben came to a treaty of their own, with Leslie coming to understand that she can’t expect Ben to just be OK hanging out with her but not being in a relationship, and Ben agreeing to have one fun, five-minute workplace conversation per day. While I think Parks and Rec has been doing a good job of addressing the tension between Ben and Leslie as she runs for council, at some point they need to wrap it up and get these two crazy kids back together. 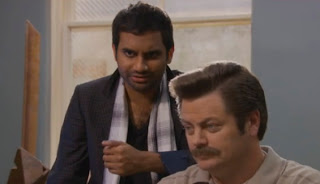 The subplots this week were small, but also excellent. Ron tried to get Tom, who was working as a perfume sample guy at Macy’s, to swallow his pride and take his old job back. The parade of losers Ron brought in to interview for Tom’s old position was funny, but not as funny as seeing Tom take advantage of the way Ron tried to let him save face. You can only push Ron so far, so Tom was eventually physically intimidated into begging for his old job back. Oh well, I’m just happy to see Tom back where he belongs.

Meanwhile, Chris was freaking out because Millicent wasn’t returning his phone calls. He gathered together Jerry, Donna and Ann for a “wildly inappropriate” brainstorming session on what could be going wrong, where Ann finally told Chris that she lost herself and basically became him while they were dating. Then he got bored of dating himself and dumped her. It was nice to see Ann so self-assured, and anytime I get to see Jerry squirm with discomfort is good in my book.

Also, can we talk about how great April and Andy were this week? April had be cracking up with her insistence to be the moon at Model UN (and her costume to play the role) and she shared a nice little moment with Leslie in the hall after everything fell apart. But Andy really killed it this week. First he refused to play Iceland (the bad guys from Mighty Ducks 2) or Japan (the bad guys from Karate Kid 2, even worse) and then he requested Germany because “they have never been bad guys.” Oh my god. Then he traded away all of Germany’s boring stuff, like armies, for all the lions he could get. Amazing. And his exchange with Ben about “Camp David” was comedy gold. Seriously, he really killed it this week.

OK, so if you didn’t think “The Treaty” was hilarious, then we’re not friends anymore. But if you did, check out just a few of my favorite lines and moments from the episode:

Parks and Recreation: Treaty Yo Self!
https://haligonia.ca/parks-and-recreation-treaty-yo-self-48378/