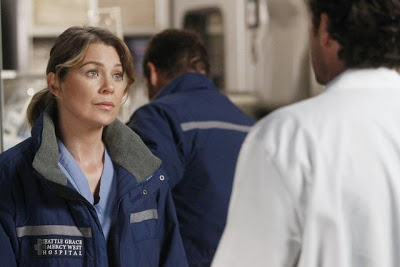 Admittedly, I’ve been pretty crappy about writing Grey’s Anatomy reviews this season. It’s been a disappointing season, and I usually DVR the show and watch it sometime on the weekend. There used to be a time where it was compelling TV that I couldn’t wait to watch, but that time seemed to have passed.

But last night’s episode? It was really, really good. “Dark Was the Night” had so many layers and twists and turns and heartbreaking moments, it was Grey’s at its best the way most of last season was.

First let’s talk about Meredith. It looks like she’s not getting Zola, at least for now. The social worker told her it’s time to move on. This wasn’t the outcome that I wanted since I thought a baby would be a good plot progression for her and Derek, but the news that Meredith had lost her child made her storyline this week so much more dramatic.

Meredith and Alex went to get a sick baby from a hospital that wasn’t equipped to take care of it. They had limited time, and on the way back to Seattle Grace the ambulance broke down. The EMT went to get help and told Alex and Mer to get out of the vehicle because all the oxygen could explode if something went wrong, but that meant leaving the baby. (The baby was hooked up to a bunch of stuff keeping it alive.) Meredith and Alex stayed, and while they were on the phone with Arizona there was a loud explosion and the phone cut out. When Alex and Meredith got out of the vehicle with the baby with them, hooked up to only what it absolutely needed, they saw that the ambulance coming to get them had exploded (or something?), killing everyone inside.

This is where the episode cut off, so Meredith, Alex and the baby’s fate is just one of the things that we’ve been left hanging with.

Henry needed an operation, and fast. Teddy couldn’t do it for obvious reasons, but she also couldn’t even be there because she was in the OR, repairing a heart that was so destroyed that no one else present at the hospital could do the surgery. (Callie had been supervising Jackson on a surgery that involved placing screws in a spine. One came loose and tore up a very likable woman’s heart, and we still don’t know why.) The Chief was going to do the surgery, but he’d never done it with a laser before and wanted to do it the old-fashioned way. Teddy wanted the laser, so she instructed them to let Cristina do the surgery – without knowing it was Henry. That would put too much pressure on her. (Although she did save Derek that time, so maybe it wouldn’t have.)

Cristina was obnoxious and cavalier about having to do a procedure she’d already done, and rambled on about timing herself and trying to do it in under two hours. But that wasn’t why it failed. Henry had a tumor that couldn’t be operated on and would have soon killed him operation or not. Without knowing who the patient was, Cristina knew there was nothing that could have been done for the guy and was more concerned about getting a bad outcome than the patient’s death. The pained looks on everyone else’s faces as she rambled on was heartbreaking, but not nearly as bad as Cristina’s reaction when Owen finally told her who the patient was. We didn’t need to hear what she said to get the full effect there.

Of course, the worst part was the decision Owen had to make. Did he interrupt Teddy in surgery to tell her that her husband had died? The injuries Teddy’s patient had sustained were so serious that no one could take over – Owen tried and Teddy told him he’d be out of his depth. So Owen pretended like everything had turned out fine for Henry and let Teddy continue to operate. That’s the worst part – Teddy didn’t just not know Henry died, she thinks he’s OK. It’s horrible, and the aftermath is going to be brutal.

So that’s the other thing that has been left hanging, and we won’t be getting a Grey’s fix for a while. (It’s not on next week because of Private Practice, and the following week is Thanksgiving.) This is the first time in a while that I’ve finished an episode of Grey’s Anatomy thinking I HAVE to know what happens next, and it’s unfortunately going to be a while.

What did you guys think of the episode? Best of the season so far? Are you dying to know what happens next?

Checking in on Grey's Anatomy
https://haligonia.ca/checking-in-on-grey-s-anatomy-48369/