Welcome back, ANTM fans! After last week’s ridiculous salad bowl shoot, I have to say I lost interest in the show a little and didn’t get around to watching this week’s episode on my DVR until Sunday night. But watched it I did, so let’s talk!

Judge and You Shall Be Judged

First, the girls were all told they’d sit on judging panels for each other. Girls who are fiercely competing against one another engaging in a judging session? That’s a great way to induce catfights and get the waterworks turned on.

Lisa was hard on Allison – I think she’s jealous. But other than that, the comments weren’t too harsh. Obviously, that wasn’t cutting it for Miss J and the producers. They needed insults and bickering, dammit! So Miss J asked each girl who they thought didn’t deserve to be in the competition. Laura, Allison and Lisa abstained from answering. Dominique pointed out Angelea as lacking in confidence. It was a weirdly passionate, yet critical moment. Laura jumped in and got bright red, yelling “This is me gettin’ mad! You are a beautiful woman but you don’t know it!” Um, what? It was super weird, and obviously Angelea felt singled out and hurt.She overreacted – I mean, she screamed and swore and stormed out – but I felt for her. Until she said the other girls shouldn’t “psychologize” her, and then I just laughed.

Frankly, I was just waiting for the point when everyone would have a turn to critique Miss J. What was that braid and side ponytail combo? What was that? Sadly, the opportunity to question Miss J’s hairstyle choices never came.

In the end, the models had to name the best runway walk, the best portfolio, and the best overall star appeal. Allison was overall weakest, but I really think that’s because the other models either are jealous of her or don’t get her. Laura was strongest overall, which makes sense since she has such a strong commercial appeal. 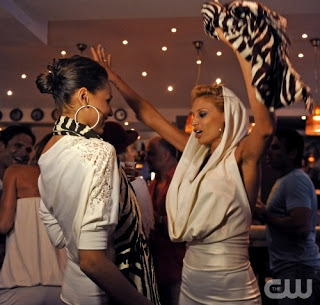 For their prize, all the girls were treated to a night out on the town with…I don’t know, some Greek socialite or something. Anyway, it’s only worth noting because it was absolutely HILARIOUS to watch the models try and avoid doing all the shots their host was offering them. Allison said she’d been brought over 25 of the same kind of shot and just kept tossing them over her shoulder. (Anyone else reminded of The Office there?) Unfortunately that meant we didn’t get to see any of the models get sloppy drunk and humiliate themselves. Oh well, there’s always every other reality TV show for that.

Thank god, a return to actual modeling. I’d much rather see the models pose and portray Olympic sports than see them pouring balsamic vinaigrette over their bodies while lying in a giant bowl of lettuce and feta cheese.

It was weird, though. Dominique actually had a javelin, but Allison was given a handbag for a discus. Lisa felt conflicted because she was given hurdles but had a lot of jumping shots already, but Nigel told her not to worry about it. She definitely got a good shot, which is unfortunate since I’m not a fan. Laura rocked her bow and arrow shoot. Angelea had a shell instead of a shot-put, and it was an awkward shoot. I think the girls who had actual props instead of pretty stand-ins had an advantage in this photo shoot.

OK, now WHAT was going on with Miss J’s hair at the panel? I think Andre Leon Talley and Miss J need to have a conversation.

Allison: I really liked Allison’s photo, as always. The heel was sinking into the ground, but whatevs. 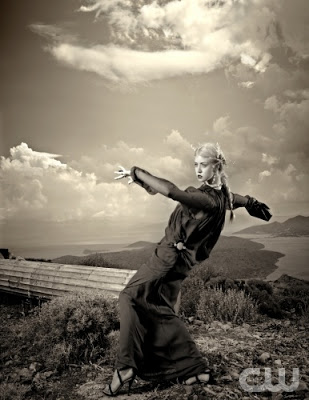 Lisa: Ugh, why must Lisa deliver good photos? It’s so annoying. But this was a good shot, I have to admit it. 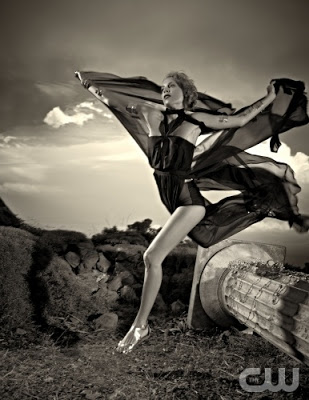 Dominique: I expected better from this shot, but it was still good. I just expected great. 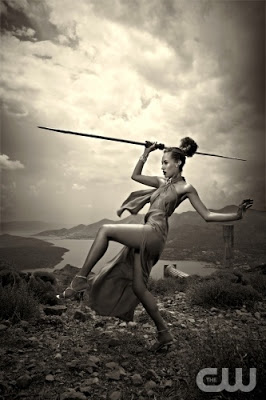 Angelea: Hmm. I liked Angelea’s arm in this, but not much else. It’s Angelea’s time to go. 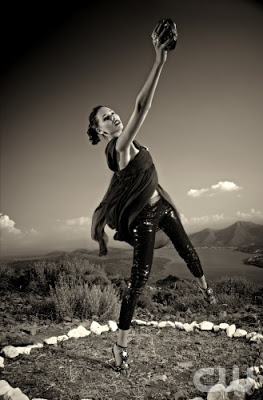 Laura: Absolutely, positively my favorite photo. Gorgeous. Even with the knee. 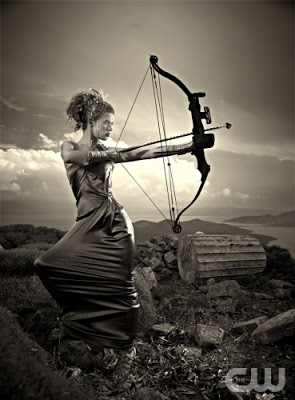 Laura was called first (well deserved), followed by Allison (yay! I was worried they didn’t life her this week) and Lisa. That put Dominique and Angelea in the bottom two, and I thought it was obvious that Dominique was better this week and has been stronger throughout the whole competition.

Shockingly, Tyra announced that Angelea would be staying. I couldn’t believe it, I think Angelea has been crumbling for a while and is in over her head. But Dominique has been holding her own. What do you guys think? Did Tyra make the right decision?

We’re down to four. My favorites from the beginning have been Allison and Laura, but I have a feeling the final two might be Laura vs. Lisa. Let me know what y’all think in the comments!w