It’s official. I’m breaking up with America’s Next Top Model. I’ve been contemplating doing this for seasons cycles, thanks to Tyra’s crazy antics, disappointment over winners, and a general decreasing interest in the show. And after last night’s ANTM All-Stars finale, I’m finally pulling the plug.

It’s been an unfortunate season, filled with weird photo shoots (Greek salad, anyone?), ridiculous “video editorials”, questionable eliminations (Laura only placing fourth? The winner?) and six million utterances of the word “branding”. I love looking at pretty people, pretty clothes and pretty pictures, but after failing to produce an actual top model, this show has seriously lost sight of what the modelling industry is actually looking for.

Just look at the final three. Lisa, a thirty year-old woman who, quite frankly, is past her prime when it comes to the modeling industry. Angelea, someone who found herself in the bottom two four times over the course of the show and whose ability to deal with her emotions and deal with stress was questioned more than once – not to mention that fact that, when all was said and done, she was disqualified from the elimination. And Allison, someone who is only 23 years old, has an artistic sensibility that would be considered an asset in the fashion industry, and someone who actually looks like a model I’d see in a fashion magazine. And they chose Lisa. What kind of career do they really think they’ll be able to get out of Lisa?

OK, let’s talk about the episode. We started off with the CoverGirl commercial and photo shoot. This was obviously something that played more to Lisa and Angelea’s strengths than Allison’s, who noted that she’d really struggled with this in her original season. Lisa turned out to be too hammy and forced in her commercial, Allison was a bit too meek and quiet in hers, and Angelea managed to infuse a lot of personality into her commercial – not that it ended up mattering.

The photo shoots seemed to go well, although Allison’s issue with her eyes once again hindered her performance. They’ve done so many outdoor shoots in Crete, I think that really dragged her down in the final few weeks of the competition. Luckily, having her eyes closed really showcased the eyeshadow she was selling.

Next the girls did their Vogue Italia shoots, something that I thought would really play to Allison’s strengths. But did we see the judges assess those photos? I don’t remember seeing them.

And then, finally, the runway show – this time with the final three girls instead of the final two. The girls wore the gowns they’d helped design earlier in the competition. All three were gorgeous, although I thought Angelea’s stood out the most on the runway. The runway show was very cool, with a bizarre underwater swimming aspect that Lisa really struggled with. Lisa’s runway performance was too party girl for my taste, but the audience ate it up. 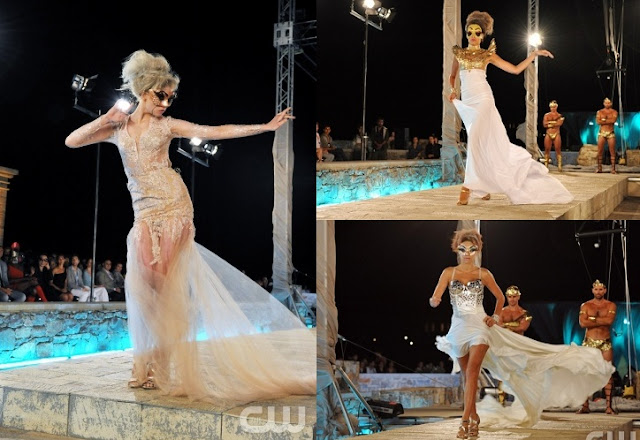 This is where things got weird. We were back in L.A. for the finale, sans Angelea. After the competition, ANTM learned some information about Angelea that disqualified her from the competition – they didn’t give specifics. They thought it was only fair to reevaluate Lisa and Allison without the added competition of Angelea. So had they already selected a winner back in Crete? Was this a re-do? Who had won? Angelea? (Word on the Webs is that Angelea might have been stripped of the title for revealing her win on Facebook before the finale had aired.)

First they assessed the commercials, and I thought the girls were about on par with each other. I didn’t think either stood out – although at the very least, Allison’s was more visually attractive. Next they showed us the CoverGirl photos, and unlike the judges I preferred Allison’s. Yes, the look in her eyes was a little vacant and it was definitely not her strongest photo. But she showcased the product and she looked like a model. I didn’t even notice the eyeshadow in Lisa’s photograph, and she still looked too old to me, like someone who spent too much of her 20s sitting out in the sun. (I’ve included Angelea’s even though it wasn’t assessed and, personally, I find it too severe looking for CoverGirl.)

Next they assessed the runway walks, and yes, they preferred Lisa. Like I said, both Lisa and her runway style are just Not. My. Thing.

Before announcing the winner, the judges assessed both girls’ work overall. I still really, truly felt that Allison deserved to win – even though I was sure she wouldn’t. Lisa, to me, is a one-trick pony. Most of her shots kind of looked the same, and I don’t find her look interesting or unique at all. But interesting and unique are the two words most people would use to describe Allison. She’s a girl who would inspire a designer, who would get to be the face of an ad campaign. She’s a muse.

But “branding” was the watchword this season, and the judges weren’t really looking for a model. They were looking for a reality TV star, and that girl was Lisa. At the end of the atrocious second half of the “Modelland” video (which looked exactly like the first half) she was revealed as the winner. And with that, I’m done with this show.