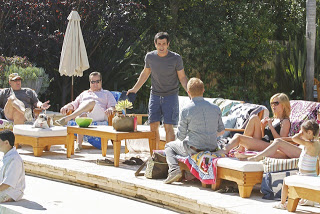 Last night’s episode of Modern Family was the Christmas episode and, I have to say, I thought they managed to deliver a unique and funny premise. While lounging around the pool on December 16th, the family realized that due to travel plans it would be the last time everyone would be together before the holidays. But, Phil to the rescue! He proposed they spend the next four hours preparing for Express Christmas, the best holiday craze since Chsitmakkuh or Festivus. 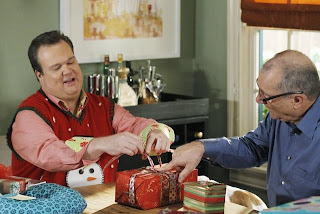 Tasks were delegated – on Dasher (Claire), on Dancer (Mitchell), on Prancer (Cam), and on Vixen (Gloria)! Luke and Gloria were assigned the task of getting a special angel ornament from the attic, because the attic is scary and Luke isn’t afraid of things. Phil and Manny were charged with picking up groceries, including a cooked turkey. A bewildered Alex tagged along with Mitchell and Lily to pick out the perfect tree – this was, by far, my favorite pairing. Claire and Haley headed to Target to buy all the Christmas gifts, a challenge Haley had been preparing for her entire life. And Cam and Jay teamed up for gift-wrapping, because Cam has a mobile wrapping station that Mitch paid for itself. 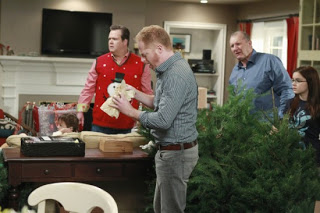 And, of course, disaster struck in so many ways. Alex and Mitch turned out to be carbon copies of one another, but not only angered the Christmas tree salesman by accusing him of stereotyping (they thought he was suggesting they buy a pink tree…he wasn’t), they also didn’t properly tie the tree to the car and it slid off the roof…getting run over by Gloria in her car, and then a truck.

After running over the tree, Gloria noticed that there was a spider on the very special angel ornament and threw it out the sunroof – where it was subsequently run over by a truck. Oops! 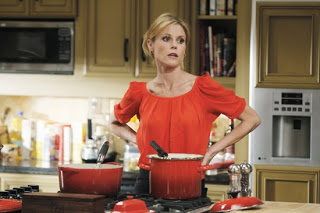 Meanwhile, Phil ended up trading the turkey for a mint-condition baseball card he wanted to give Jay for Christmas. But when Manny (who’d been scared into thinking he might get kidnapped by Luke) thought “Butterball” referred to him, he attacked with a Taser, hitting Phil. Convulsing from shock, Phil crumpled the baseball card, rendering it worthless. No turkey, no gift.

Speaking of gifts for Jay, Cam’s totally fell flat when he presented Jay with the cork from the bottle of wine they drank when they watched their first football game together. Jay, of course, didn’t remember the occasion and Cam’s feelings were hurt.

Only Haley and Claire were successful, as Haley put that cunning mind of hers to use in procuring the last item on their list. A guy snatched it up before she did, and she went for the obvious – showing off her cleavage to flirt her way into getting the gift. But he turned out to be gay, so Haley got more creative, donning a target shirt and offering to hold the customer’s items up front for him. Brilliant! 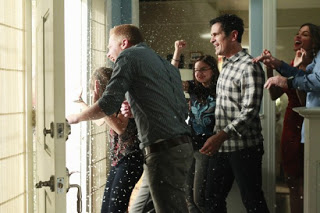 When all was said and done there were frozen Cornish game hens instead of a cooked turkey, a splintered Christmas tree and an incredibly lack of Christmas spirit. But Jay saved the day, ushering the whole family outside to go out for dinner but instead surprising them with a snow machine. With that, the day was saved. An Express Christmas miracle!

The episode might have started out slow, but the odd character pairings and series of unfortunate events turned “Express Christmas” into one hilarious episode. What did you guys think? And, of course, check out a few highlights from the show: