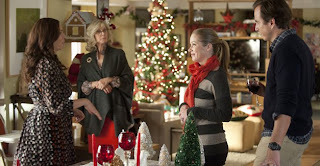 There was a lot going on in last night’s Up All Night episode but, for the most part, I think it worked. Reagan wanted Amy’s first Christmas to be a special one, especially after seeing the adorable baby giggle and light up over the neighbor’s over-the-top Christmas decorations, so she too went all in when it came to Christmas cheer.

Reagan and Chris are like the opposite of HIMYM‘s Marshall and Lily. Marshall, even though his baby has yet to be born, was thrilled to embrace both the suburban lifestyle and all the Christmas decorations that come with it. For Reagan and Chris, this is new and unexpected territory. And while I love me some Marshall Erickson, I also get a kick out of watching Reagan go nuts at Christmas for the first time. Especially with the added crazy of  visit from her mother.

Meanwhile, Chris’s storyline was even better – mostly thanks to Will Arnett’s fantastic physical comedy during his disaster trip to the mall. He really wanted to get Reagan something special for Christmas, but felt awkward about it since she’s currently the one bringing home the bacon, not him.

And, of course, there was the Ava plot – full of, if you ask me, just the right amount of wackiness. After her new boyfriend Kevin told her that he and his ex-wife would be spending Christmas together to try and make things seem normal for their kid, she got freaked out that the holiday mood would rekindle their relationship – and thus spent the episode spying on him from neighbors’ houses.

The episode wasn’t packed with a lot of jokes, but it felt like a Christmas episode that stayed true to who the character are. What did you guys think?