Well, it was only a matter of time. Remember back when this cycle of ANTM started, Tyra divided up the girls by type? Rhianna, Lexie and Ann were all put in the “quirky” group, and Ann just way outshines them.
“Play the reindeer games, Rudolph!”
After Lexie’s announcement that no one likes Kacey last week, Kacey decided to try and get to know the girls better by having everyone write questions down on bits of paper and randomly answer them. I thought it was actually a pretty good idea, even if it seemed like something you would do at camp. And I hate camp. I felt bad for Jane actually, because it seemed as though she was being ostracized from the other girls because of her privileged background. It’s not her fault her family is rich, although I can see how it would be hard for some of the other girls who have struggled so much to be able to relate to her. Also, I love Jane because she gives off an awesome Julia Stiles vibe. 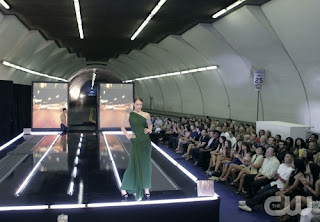 The challenge this week involved the male models again, which meant Kacey was getting her flirt on once again. The girls had to walk along conveyor belts (going in the opposite direction), which sounded tough. But still not as tough as walking through some swinging pendulums. I think the male models were present only to demonstrate how much easier modeling is if you’re male and get to wear sneakers.

Chelsey (one of my favorites) came out first and stumbled quite a bit, but she didn’t fall off the runway or anything. So like I said, not as bad as pendulums. Liz stumbled too, but she made it even worse by swearing on the runway. Reeeeaaallll classy. For all of Ann’s triumphs in photos, her walk is horrible. So, so awkward. Lexie did a great job in keeping her balance on the runway, but so did her arch-nemesis Kacey. Chris seemed like she was doing well too, but instead she also let out a curse word. Girls! Hold it together!

The winner of the challenge, who won some very pretty jewelry, was Kacey. The scream she let out though did not help her popularity.
The next thing that happened pretty much blew every girl’s mind – Andre Leon Talley showed up. Oh, and he brought Karolina Kurkova with him. Crazy! She was there to teach the girls about healthy eating, which was actually pretty great. I mean, it sends a better message than casting and then eliminating skeletal girls and telling them to eat an avocado, right?
Get Ready to MMMMMMMOOOOOODDDELLLLLL

For the photo shoot the girls would be posing opposite Mexican wrestlers. Yeah, you read that correctly. And yeah, it was wacky. But also kind of cool. Liz had trouble interpreting instructions when it came to her facial expressions, Jane had trouble bringing the badass, but Esther really rocked it. Kacey got to wear amazing boots, Chris really committed and jumped around, and Ann struggled a lot more than usual. 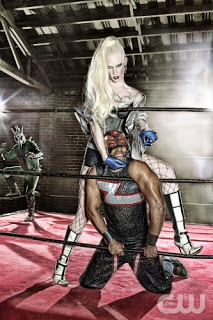 Kendal: Kendal was positively glowing at judging, and her photo was just as stunning.
Lexie: Lexie got overshadowed by the wrestler in her shot. Her face was weak, her pose was boring.
Esther: I loved Esther’s photo, even though the wrestler did command some attention.
Chelsey: I think Chelsey (pictured, right) delivered my favorite photo. She delivered an intensity that no one else did.
Ann: Man, that girl can do no wrong. Her picture was totally bizarre, but it totally worked.
Jane: Nigel was right, Jane’s photo was sort of porn-ey. But her face looked amazing.
Chris: Major props to Chris for jumping in her photo. Chris doesn’t have my favorite face, but she can pose.
Kayla: Um, was Tyra serious about Kayla’s hair? That was not a good look. That was a morning-after-the-bar look. Her photo was rock-star awesome, though.
Liz: Liz’s photo delivered a boatload of crazy, but it kind of worked.
Kacey: I like Kacey, even though she’s the source of a lot of drama in the house. I think she’s got killer cheekbones. But that photo was week.
So who would be best photo? Who would be bottom two? My money was on Kacey and Lexie, since the producers had played up their rivalry throughout the episode. But the judges were pretty unimpressed with Jane/Julia Stiles as well. As or best photo, I liked Chelsey’s best but I could see it going to Ann or Chris as well.
Tyra called Ann (pictured, below) AGAIN. She made Top Model history by grabbing the first four consecutive best photos. 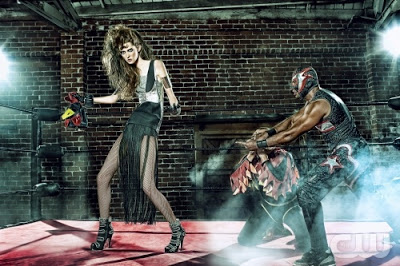 Next Tyra called Chris and Chelsey. Kayla, Liz, Esther, Kacey and Kendal followed. Which meant Lexie and Jane were in the bottom two.
I like both girls, but I didn’t think either could win. Lexie seemed to have had weaker photos overall, so I agreed with the judges’ decision to let her go. Did you? And do you think Ann’s streak will ever win, or do we already have a winner?