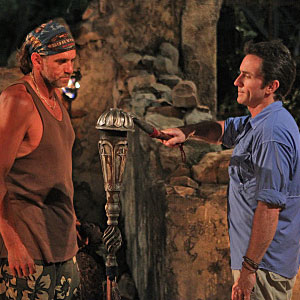 I’m struggling to come up with something to write following my conference call interview with ousted Survivor contestant Jimmy T. It’s not that he didn’t have anything to say. I’m sure it comes as no surprise to you that Jimmy had plenty to say. But I won’t lie, the guy knows how to ramble and it was not easy to follow. I only wish I’d had something to take a shot of every time he said “opportunity”.
On making it on Survivor…
“We knew me being the character I am, if only I could get the opportunity…” [To have his tape viewed by voters]
On the challenges…
“If they had chosen me to lead, I could have won that challenge.” [The beanbags on barrels challenge]
On if he’s been placed on the younger tribe…
“I think I might’ve gotten a couple opportunities…” [To play, to be heard, etc.]
On playing Survivor a second time
“If given the opportunity I’ll play and I’ll win.”
I’m not so sure about that last one though, since Jimmy himself admitted that he thinks Jeff Probst finds him an annoying character. Still, Jimmy said “There’s no question in my mind, the next time I play this game I’ll play with my head and not my heart. I was hoping what had been working for me for 49 years would still work in the game and bring me success, which was just being honest and genuine and hard-working. I wore myself to a frazzle.”
Suffice to say, Jimmy T. does not seem to have learned much from his Survivor experience. He said he isn’t an egomaniac who was always on the hunt for attention, he just wanted what was best for the tribe. Which, judging by his comments on Wednesday night’s show, was for him to run things.”Why didn’t I say, ‘Are you people all fools?'”, Jimmy said. “You’re all blindly following Marty to the slaughterhouse like sheep.”
Some might say that Jimmy was the only person who thought Jimmy should lead, but he has a theory for that: “The leaders obviously didn’t want me to step up because they knew I could succeed and when I did, it would make them a target and make them accountable for the mistakes they had made so far,” he said. “It’s real tough for my personality to sit on the back of the bus while the driver is driving you towards the cliff.”
As for his fellow tribemates, Jimmy said Marty’s running the show, that Jimmy Johnson didn’t bother to learn the ladies’ names (they certainly seemed to like him, though) that “Yve’s got a ton of issues” and Tyrone has “a chip on his shoulder…he’s kind of a ball hog.”. He felt closest to Jane and wants her to win because “She’s true to who she is.”