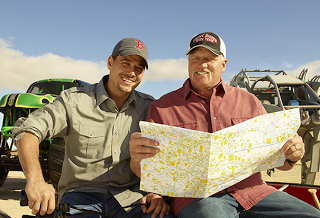 So, do y’all remember that time I interviewed Boston Rob of Survivor and The Amazing Race fame and maybe I was a little nervous? Well, that was for his new show on History, Around The World In 80 Ways, which premiered on October 2nd. I’ve watched the first two episodes now and I’ve got to say, it’s a really cool show.

Boston Rob and his monster truck driving co-host Dennis Anderson have to circumnavigate the globe using 80 different modes of transportation. What’s great about the show is that it’s the perfect combination of exciting, funny and informative. Some of the things these guys have done so far have really had me on the edge of my seat, but the friendship that’s developing between them is what makes me laugh. They’re like oil and water. Rob is from Boston, obviously, and has traveled the globe. Dennis is from North Carolina and this is his first time out of the USA. Within minutes they were bickering. Peppered throughout the episode are interesting bits of information and history on the different modes of transportation they’ve been using – hey, it never hurts to make me feel like I’m learning something while I watch TV. 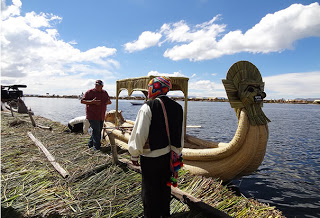 The trip started out in L.A. and the guys traveled all across South America over the course of the first two episodes, everywhere from Peru to Rio de Janeiro. So what are the coolest modes of transportation we’ve see so far? In episode one, the guys did a set of three ziplines that had me squirming with fear – and I’m not usually afraid of heights. The ostrich races they did were hilarious – Dennis’s ostrich wouldn’t budge while Rob’s finished the race and then ran off into the woods with him still sitting in the attached cart. You also had to laugh when the guys decided to race some straw boats and Rob, ever the schemer, attached a motor to his. You can take the guy out of Survivor, but you can’t take the Survivor out of the guy.

Next week, the guys head to Africa and it looks like there’s even more excitement in store. You can catch the shows as they air on the History website or watch them on YouTube, so I highly suggest you check it out!

Around the World in 80 Ways - From Ziplines to Ostriches
https://haligonia.ca/around-the-world-in-80-ways-from-ziplines-to-ostriches-46142/