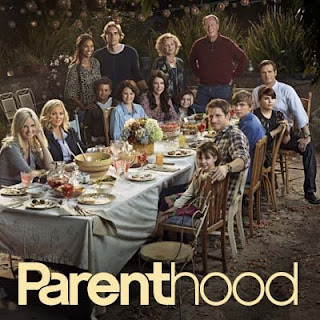 Despite the fact that I blurted “Oh come on now, really?” to my television when I saw Peter Krause walking down the street in that ridiculous get-up on Parenthood last night, I still thought “Nora” was a fantastic episode – and, surprisingly, for many reasons other than the birth of a new Braverman. But let’s save that for the end.

John Corbett returned to the show as Sarah’s ex-husband Seth this week, and holy crap was it good. I actually kind of wish we hadn’t also had the Baby Nora storyline this week because I would have liked to focus more on this – but I know we’ll get to it.

First, Seth showed up on the Braverman’s doorstep, drunk and belligerent, as Sarah returned home from her date with Mark – or “Captain Morgan” as Seth so charmingly put it. He’d fallen off the wagon and been kicked out of the band – it wasn’t clear which thing caused which – and had run back to Sarah looking to “hang out and play guitar” like old times. The great thing about Parenthood is that it’s the kind of show that makes you really care about the characters. I was angry about this. I was angry that he proved Amber right, I was angry that he was going to mess things up in Sarah’s life, I was angry that he risked having his son Drew see him in such a state. Sure I’d like to think I’d react with compassion for his disease like Camille, but I’d probably act more like Zeek and run him off the property threatening to call the cops. OK, I probably would have found him a cab. The point was, I was mad.

Watching Sarah struggle with concern for Seth, embarrassment at the spectacle of it all in front of Mark, her anger at her dad for intervening and later her worry that the drama would scare Mark, a guy she really cares about, away was all really, really good acting. Lauren Graham is so good at conveying things with just a simple facial expression, or a touch of hesitation in her voice.

After things had been smoothed over with Mark (of course they were, he’s so understanding and sweet and I love him!) but not with Zeek (Sarah overheard him telling Camille that Sarah never knew how to deal with Seth and never would), Sarah got a call from Seth. Drunk, in the middle of the night, he was next to a dumpster behind a motel and had had the crap beaten out of him.

Last time we saw Seth I thought he was an asshole because he’d been a deadbeat dad, because he was unreliable, because I thought he didn’t care enough about his kids. But he was clean then. Now, it’s just really sad. His a danger to himself, and that makes him a danger to his family. I understand Sarah’s need to help him, but I also don’t want that to get in the way of her life and her goals, or worse cause any pain for Drew and Amber. This could be a really interesting storyline, watching Sarah try to keep her new life together (as cool as Mark was after the first incident, the issue is bound to cause some friction in their relationship) while still in some way being tied, forever, to Seth. I’m really looking forward to seeing where Parenthood takes this.

I’m Still Not Using This Baby…

I thought I’d hate it if Zoe ended up giving her baby to Julia and Joel, but because of where I think this storyline could go, I’m actually intrigued.

When Zoe experienced contraction-like pains, Julia took her to the hospital and stayed with her. She couldn’t call her boyfriend or her mom, she was all alone. So Julia pretended to like what was on TV and sat with her, and later invited her to spend the next night at her and Joel’s home. Because something resembling a friendship has developed between Julia and Zoe, and because Julia totally understood Zoe’s desire to have a closed adoption, I didn’t get a gross feeling that this was all a ploy to get Zoe’s baby. Julia is a good person. I believed that Julia did all this because she was worried about Zoe, and because a good person wouldn’t leave a young, scared, pregnant girl alone at the hospital.

Of course, once I saw Zoe watch Julia and Joel interact with Sydney, I knew what would happen. And yes, it was all rather contrived and too easy. They’re a young, pretty, happy family. They have a nice house and they love each other, and they love their daughter. Of course she’d want to give them the baby, right?

It’s not Julia and Joel getting a baby that has me interested, it’s how Zoe will fit into the picture. By giving Julia her baby, has she reconsidered her views on adoption? Will Zoe leave Berkeley and go live a new life, or will she opt for an open adoption and be present in her biological son’s life? This is what has me intrigued. I’d love to see Zoe made a recurring character, because I think it would be really interesting to see the show deal with a family with an adopted child and a birth mother who is somewhat present in the family’s life. I’m willing to overlook some of the flaws in this storyline if they can make it worthwhile down the road.

One of my favorite storylines this week was a very small one. After his altercation with Jabbar, Max was given lunchtime detention for a week and had to write a letter of apology to his cousin. I felt bad for Max since, yes, Jabbar had hit him first. But Max is in mainstream school now and he is significantly older than his cousin. Max had to learn that pushing a smaller kid (or, you know, any kid) isn’t OK, and that meant punishment. Kristina was worried about him though, and in desperation she asked Amber to help.

There were a few things I loved about this, the first being the initial scene with Kristina and Amber. I love when characters who don’t normally interact have a chance to do so, and we rarely see Kristina and Amber together. Their mutual discomfort acknowledged that – I loved how nervous Kristina seemed as she spoke into Amber’s intercom at her weird apartment. Kristina asked Amber if she could go sit with Max and help him with his letter (isn’t that what teachers or teachers’ aides are for?) because, really, there was no one else who could do it. Amber was naturally hesitant and acknowledged that she might not be the right person for the job, that she hadn’t spent a lot of time with Max. But she’s family, and Kristina needed her, so she had to do it.

I think the scenes between Amber and Max really highlighted just how bright Amber is. She hadn’t quite realized how many ways Max’s Asperger Syndrome effects him, like the way he couldn’t tell the difference between a wooden apology and a heartfelt one. But Amber figured out how to help her cousin using rewards (that sounds better than bribery, guys) and videos (Bill Clinton! Loved it.) and helping Max figure out what makes an apology real. Max was really good in these scenes too and I am continually amazed by what a great actor Max Burkholder is, but the storyline really reminded me how smart Amber is and how much I hope she returns to school and does something interesting and creative and intelligent with her life.

Before Amber does that, though, it looks like she might become Max’s new behavioral aide. After all, we were reminded that Gaby hadn’t been replaced yet and with a new baby Kristina will need more help than ever. This is excellent – a great chance to see Amber interact with a whole new section of the Braverman family. But I also hope it inspires Amber to do something else, like study child psychology or something.

Meanwhile, Crosby and Adam faced a hurdle with the Luncheonette as they prepared for a meeting to seal the deal with a client that Crosby had already implied was locked in. He asked Adam to untuck his shirt and “hip it up” a little, which resulted in Adam trying on a hilarious collection of shirts from the 19…80s? and then being pressured into buying a ridiculous hip-hop style outfit circa 2003 from a sales guy (who apparently hasn’t seen how Kanye West dresses) who was a big fan of the rapper her and Crosby were trying to work with.

They almost lost me with the image of Adam walking down the street wearing a sideways hat, chains, baggy pants and sneakers, but thankfully Adam immediately acknowledged how moronic he looked and asked Crosby to stop by his place and grab him some real clothes. When Crosby showed up there he got into a heated argument with Kristina (he was angry because she was going to see Jabbar’s pediatrician who is now dating Jasmine, she was angry because he’d lied to Adam) and Kristina went into labor.

While Crosby was rushing his sister-in-law to the hospital, Adam was floundering during his meeting with the rapper and his…er…posse? Entourage? What are the cool kids calling “friends” these days? Anyway, while there was some comedic benefit to watching Adam trying and hold it together, I had to wonder why he wasn’t calling Crosby to find out what the hold up was. Did he not have cell service there? Why wasn’t he getting Crosby’s messages?

Of course, the payoff was that Kristina had to go through labor with her least favorite Braverman at her side rather than her husband. (Also, doesn’t Crosby know Haddie’s cell phone number? Pull her out of school! Or call Camille! Jasmine! Anyone else!) They made it work and eventually Crosby got the message to Adam that his wife was having a baby – but not before Adam seemed to be able to charm his prospective clients with cute old white dude stuff like “I like that song about your brother getting shot” and “I’d let my kids listen to your music if you didn’t curse so much”. Um, really Adam? Will Smith these people were not. But it seemed like they liked you because, well, this is Parenthood and he Luncheonette is a storyline and therefore cannot tank just yet.

Kristina gave birth to baby Nora, the whole family showed up, and we witnessed a heartwarming reconciliation between Max and Jabbar. This episode has set up some really interesting story arcs for many of the characters, and I can’t wait to see where they go. With all my other Tuesday night TV shows on hiatus for a few weeks, I’m more thankful than ever for Parenthood.