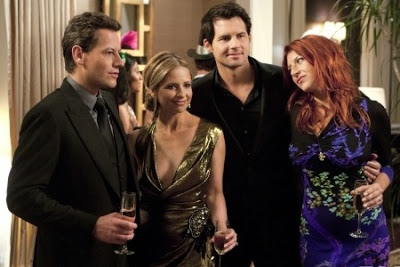 In my review of the second episode of the CW’s Ringer I said that while it was clear the show was nothing more than a campy, juicy nighttime soap, I was open to having something like that in my schedule. Now four episodes in, I still feel the same way.

Tuesday night’s episode of Ringer featured another surprising twist that’s sure to be the source of a lot of mystery and drama over the course of the next several episodes. Read on at your own risk!

In last week’s episode, Bridget came clean to Siobhan’s “best friend” Gemma about her true identity. The thing is, that didn’t work out so well for her. Sure, it meant that Gemma knew Bridget wasn’t the one sleeping with her husband. But Gemma still felt betrayed by Bridget and disgusted by the way she’d been misleading everyone in Siobhan’s life. She owed Bridget nothing and instead of forging a true friendship with her, she used the information to her advantage. Gemma told Bridget that she had to sleep with Henry so that Gemma could videotape it and have irrefutable proof of infidelity when she divorces Henry. If she didn’t, Gemma would out Bridget to everyone.

The decision was a struggle for Bridget, obviously. Going through with Gemma’s demands would keep her identity safe but ruin the lives of Andrew, his daughter Juliet, and Bridget herself as Siobhan. It was a decision Bridget knew she couldn’t live with, and she worried the guilt would send her running back to the comforting arms of drugs. But not doing it meant giving up her cover, and still kind of ruining the lives of everyone around her.

Bridget chose not to sleep with Henry, but she never had to face the consequences. Someone made Gemma disappear, and that’s the new story arc. We saw Henry cleaning up a bloody crime scene, and god knows he had motives, but it seems too obvious that he killed his wife – if she’s actually dead. But would Bridget have done that? Bridget’s been set up as the unlikely hero all along, so having her murder her pretend best friend would be an unexpected twist, and I’m not sure how the show could recover from it. We’re definitely not rooting for Siobhan, and if Bridget becomes a villain as well who do we root for? Andrew? Doubtful. He’s too wooden to root for, and I wouldn’t count him out as a suspect in this either.

Meanwhile we’ve got Juliet starting public school (and an appearance from Jason Dohring of Veronica Mars, yay!) and Bridget’s sponsor Malcom still taking a beating to keep her safe. Both of these storylines need to get jucier to keep my attention – how many times a week do we need to see this poor Malcom guy suffer? He’s been through enough, either kill him off or give him something new to do.

Other things from “A Whole New Kind of Bitch” that were deliciously ridiculous:

This is a soap opera, so anything could happen. For now, I’m hooked enough to stick around and see what that is. What about you guys?

Checking in on Ringer
https://haligonia.ca/checking-in-on-ringer-46145/