Writers pay homage to the authors who inspired and entertained them by including them in their very own novels. Get a little insight (in most cases!) into some of these classic authors from these suggestions.

Vanessa and Virginia by Susan Sellars imagines the complex relationship that existed between artist Vanessa Bell and her sister, writer Virginia Woolf. It follows their lives from a childhood clouded by loss to adulthood as women forging their artistic careers in post-Victorian England.

Not Quite Dead by John MacLachlan Gray is a two-for featuring both Edgar Allan Poe and Charles Dickens. Irish stowaway Devlin finds Dickens’ manuscript aboard a cargo ship sailing from Liverpool to the United States. Meanwhile Dickens and Poe find themselves to be uncomfortable roommates as Poe has faked his own death to avoid the Irish Mob.

Peril at Somner House by Joanne Challis is a murder mystery featuring writer Daphne Du Maurier. Young Du Maurier, not yet a writer, investigates the murder of Lord Max Trevelyan. This is a leisurely paced mystery rich in the atmospheric detail of Cornwall in the early twentieth century.

Another mystery, Angel with Two Faces by Nicola Upson, features Josephine Tey. Again in Cornwall (apparently a dangerous spot) Tey and a close friend, who is also a Scotland Yard Inspector, investigates a death that most believe at first to be an accident.

Jane Austen has been a popular choice (target?). In Jane Goes Batty by Michael Thomas Ford, Jane was apparently taught to be a vampire by her former lover Lord Byron – who knew? She is trying desperately to keep her identity a secret and somehow an undead Bronte becomes involved. A serious and complex work of literature – just kidding! – silly and fun.

Back to the serious business of murder we have The London Blitz Murders by Max Allan Collins which features the queen of classic mysteries Agatha Christie. In 1942 London is devastated by the Blitz and has an apparent modern day Jack the Ripper on its hands.

Emily’s Ghost by Denise Giardina features Emily Bronte who lived out her short life in Yorkshire in the early nineteenth century. Giardina speculates on the relationship that might have existed between Emily and curate William Weightman. A biographical, historical and romantic novel rolled into one. 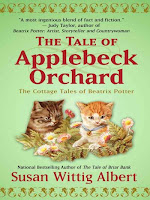 The Tale of Applebeck Orchard: the cottage tales of Beatrix Potter by Susan Wittig Albert is the latest installment in this whimsical mystery series featuring talking animals who would live perfectly in Beatrix Potter’s world. Three cats and a dog visit a ferret to find out why mean old farmer Harmsworth has barricaded their pathway through his Orchard. Miss Potter herself is on the case.

Arthur and George by Julian Barnes and Other Fictionalized Authors
https://haligonia.ca/arthur-and-george-by-julian-barnes-and-other-fictionalized-authors-37092/