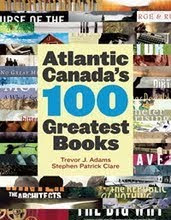 Later this month, Nimbus Publishers will release a new book called Atlantic Canada’s 100 Greatest Books. Edited by Trevor J. Adams and Stephen Clare, the book is the result of a survey of avid readers who submitted their Atlantic Canadian faves.

Here’s how they describe the book:
In Atlantic Canada’s 100 Greatest Books, Trevor J. Adams and Stephen Patrick Clare review the top one hundred Atlantic Canadian books—both fiction and nonfiction—ever published, as chosen by a panel of local readers and literary luminaries. In their own knowledgeable reviews, Adams and Clare offer insights into these titles’ continuing influence and celebrate their contributions to the Atlantic Canadian literary landscape. Illustrated in full colour with book covers and photos of the authors, and accompanied by personal selections from celebrities in the literary community and beyond, Atlantic Canada’s 100 Greatest Books is a requisite companion for fans of Canadian literature.

In the run up to the book release, they’ve been posting personal top tens over on their blog site. They were kind enough to allow us to have a say too, and here’s the list we submitted. Or I should say, here’s the list I submitted – because the list is totally based on the books I’ve read, learned from, enjoyed and want to share.

Whylah Falls by George Elliott Clarke
Homing: the whole story (from the inside out) by Stephanie Domet
Scotch River by Linda Little
Falling by Anne Simpson
Out of the Depths: the experiences of Mi’kmaw children at the Indian Residential School at Shubenacadie, Nova Scotia by Isabelle Knockwood
The River of the Brokenhearted by David Adams Richards
Skin Room by Sara Tilley
Rare Birds by Edward Riche
The Lost Salt Gift of Blood by Alistair Macleod
Curse of the Narrows: the Halifax Explosion, 1917 by Laura MacDonald

Checking out the lists over at Top 100 Books, it makes me realize how many great Atlantic Books are still on my to read list. But I’ve bet you’ve read them – post your comments below, or join the conversation on the Top 100 Books blog. (oh, and they’ve got a contest too!)