In partnership with ReelNinja.com, I’m scrawling down a few reviews. I’m not the most competent reviewer, but I do like movies a lot and spend a lot of time watching them. First up,

“I can’t accept that it happened for a reason, nor can I really accept that there is no reason. The only way to carry on is to be humble, and a little bit in awe of these things you can’t really understand.” 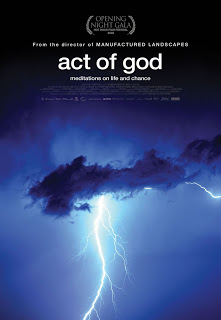 Act of God is the newest film from director Jennifer Baichwal, best known for her 2006 film Manufactured Landscapes. It is film about how people cope with being on the receiving end of something so powerful and out of their control. Lightening plays the deus ex machina and comes down from the sky to irreversibly change a person’s life. Broken, they must struggle to reform their understanding of the universe.

Through interviews with those struck by lightening, those who had close calls, and others who lost family members, Act of God explores how these people deal with an event that is so rare, and traces back the events in their lives that brought them to the lightening. A constant theme throughout the movie is the subjects’ thoughts on why they were struck; was it their fate or a completely random event? Not surprisingly, many take comfort in either possibility… that they were chosen by God, or on the contrary, that it means nothing.

The film includes some beautiful images and film clips of lightening storms, many of which seem to be lifted from YouTube. The progression of the film, like perhaps its subject, is very random. It is not a scientific exploration of this violent event in nature, but a deeply personal journey about those who have been changed forever in a two-second strike.

The metaphysical exploration of lightening strikes also leads into a discussion of electricity in the human brain, and how randomness changes the way our brain works. This is illustrated by a man whose brain waves are being observed on a computer while he plays an improvised guitar solo that is inspired by lightening.

Act of God contains powerful moments, but it loses strength in the selection of material and the jerky progression of the film. Segments stick out as being too loosely connected to the subject matter, when the film would have benefited from a more focused story. The film as a whole shows humanity’s fear and awe of nature, but sometimes ignores its subject, lightening, and the clear science behind it.

I heard a few people on the way out muttering that they thought it was supposed to be a film about lightening. Besides the clips of storms, the subject really could have been just about anything… a hurricane, a plane crash, a drive-by shooting… any event that relinquishes our control and throws us to the mercy of the universe.