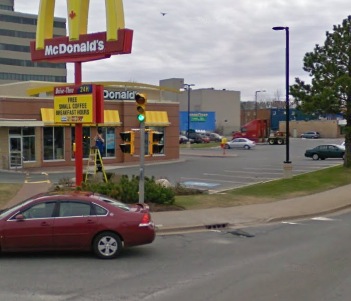 Robbery At 11:10 pm police responded to a robbery in the parking lot of McDonalds 144 Main Street in Dartmouth.  The accused approached the victim while he was sitting in his vehicle and asked for his money while holding his hand under his shirt. The victim believed he had a weapon but did not give him any money. The accused fled in a vehicle and the victim followed him directing the police to his location. The accused was arrested without incident on Flying Cloud Drive in Cole Harbour and will attend court to face charges of attempted robbery.

View Larger Map
Robbery At about 11:10 pm police responded to a robbery in the 0-100 block of Armstrong Court in Halifax. The victim who was delivering food for a restaurant was confronted by two males. They demanded money, one armed with a knife the other with bear spray. Once the victim turned over the money one of the males sprayed him bear spray. The suspects took,various items and an undisclosed amount of cash. They fled on foot.Suspects were described as two males , wearing black jackets, jeans and bandanas. File is being handled by GIS.

View Larger Map
Robbery At 6:44 pm police responded to 5675 Spring Garden Road for an unwanted person call. As a result officers encountered two males assaulting a third male.  The victim was covered in blood and disclosed he was beat by the males and they took some articles from him.  The males age 20 and 25  were arrested and are being held for court to face numerous charges.