My birthday falls in August so I confess to loving Leos of all descriptions. Just for fun I looked into some authors born in August for reading ideas! 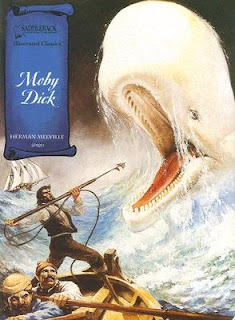 What with the departure in July of the tall ships from Halifax Harbour, the very first name to jump out at me was Herman Melville, born on the first of August, 1819. Melville may be remembered for his consistently nautical themes, but his work doesn’t end with Moby Dick, or, the White Whale (1851). Melville also penned The Confidence-man: His Masquerade (1857), and his excellent short story, “Bartleby the Scrivener”, is contained in the 1952 Selected Writings of Herman Melville. So if Moby Dick seems too daunting, perhaps it’s worth trying something shorter as an entry point.

Isabel Allende is another August birthday, born on the second day of the month, in Peru in 1942. I’ve been meaning to read The House of the Spirits (1985) for some time, and Allende also recently published a memoir that looks fascinating, The Sum of our Days (2008). British novelist P.D. James, born August 3rd, 1920, is well known for her series of detective fiction featuring policeman-poet Adam Dalgliesh. The most recent installment in that series came out last year, The Private Patient.

Now I come to an American author, Dennis Lehane, who was born on the fourth of August in Boston, Massachusetts. Lehane may be best known for writing the novel, Mystic River (2001), which was later made into a major motion picture directed by Clint Eastwood (2003). Lehane followed Mystic River with Shutter Island (2003), and his most recent novel is The Given Day (2008).

To jump to the middle of August birthdays I’m going to skip along to the 11th of the month (guess whose birthday that is!) and tell you that Alex Haley was also born on this day in 1921. Haley’s Pulitzer Prize Special Award-winning Roots (1976) tells the story of seven generations of black ancestors originating in Gambia and brought to America as slaves. Roots was based on Haley’s extensive research about his own family, and he started a second volume, Queen, about a different branch of his family, which was finished after his death and published in 1993.

Another August author recently in the news for a nomination to the Man Booker Prize long list is A.S. Byatt. Born on the 24th in 1936, Byatt’s latest work, The Children’s Book, has become very popular. Her 1990 novel, Possession, won the Booker prize in its day so it’s no surprise to see Byatt back on the list of contenders for the coveted Commonwealth writing award..
In addition to her library work, Lara blogs on a regular basis for Re:Print, a books blog at PopMatters.com, an international magazine of cultural criticism