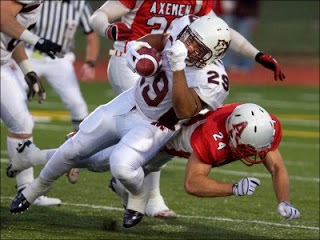 Welcome to the first edition of the Atlantic University Sport Power Rankings for Football. This will be the first of several occasions in which I rank the teams of the AUS conference, as they stand on that given day. Presently, we are 13 days in to the 2009 season and each team has played 2 games. The Saint Francis Xavier X-Men are in first place with 2 wins and 0 losses. The Saint Mary’s Huskies and Acadia Axemen are tied for second with one win and one loss apiece. The Mount Allison Mounties stand in last place, having lost 2 consecutive games to begin the season.
1. ST FX X-Men
As Coach John Macneil mentioned in an interview on CKDU Sports last weekend, the X-Men are playing excellent defensive football, but have yet to find themselves on offence.
However, for an offence trying to find itself, they did put up 500 yards against the Mounties.
Defensively, the Blue and White forced SMU quarterback Jack Creighton into 4 costly interceptions in the opening week, and then held a spirited Mount Allison team to 21 points in week 2 in Sackvile on homecoming.
St FX has shown vulnerability in the secondary, allowing Creighton to throw for 300 yards, and Mounties quarterback Jason Bertrand to throw for 235 yards.
Senior Dave Skillen, a senior defensive end, registered 3 tackles, 1 sack, and an interception en route to garnering CIS defensive player of the week in their victory over the Huskies.

The X-Men are ranked #7 in the country and are playing with renewed vigour after an off season coaching change which saw Gary Waterman take over for John Bloomfield, who was never able to get the team over the top of “Huskie’s Mountain”.

The lords of the ring will face a stern test this weekend, when they travel to Montreal to play Concordia. The Stingers seem to be down from recent years, but remain a tough Quebec team that are always hard to beat on their home turf.

2. Saint Mary’s Huskies
The Huskies rebounded from a tough loss in Antigonish to roll over the Acadia Axemen last week in Wolfville.

Head Coach, Steve Sumarah, always brutally honest, admitted that his players and coaches may have been reading too many headlines before their first game, and looking forward to the Uteck Bowl in November.

The X-Men delivered a stern wake up call, and the Huskies responded with a dominating performance versus the Axemen on Saturday night.

The Huskies shook off a spectacular 122 yard touchdown by Acadia’s Devon Jones following a missed field goal, to slowly but surely build an insurmountable lead on Acadia.

Sophomore QB Jack Creighton looked like the second coming of Steve Panella, while Devon Jones ran over and through Axemen defenders for 108 yards on 14 carries.

AUS Special Teams player of the week, Justin Palardy, made good on 5 of 6 field goal attempts, while the vaunted Huskies defence held Acadia to 106 total yards.

It was Huskies football.

The Huskies have homecoming this weekend at the Stadium versus Sherbrooke, a Tier 2 Quebec team at best.

3. Acadia Axemen
The Axemen are definitely the early favourite for the Jekyll and Hyde award in the AUS.

After absolutely whipping Mount Allison 58-15 in Wolfville in week 1, the Axemen were outplayed in every conceivable way on their home turf in week 2 by SMU. SMU put up 500 yards of offence compared to Acadia’s 106.

Versus the Mounties, the Axe ran up 640 yards of offence and QB Keith Lockwood was named AUS offensive player of the week.

These 2 games indicate a dreaded two tier conference that is the worst nightmare of AUS officials as they try to persuade Quebec to extend the interlock contract; SMU and X are really good. The Axe and the Mounties are really bad.

We’ll know more about Acadia after this weekend. They play Montreal in the city of the same name. Montreal has been one of the top teams in Quebec over the last few seasons.

At this point, the Axemen are looking like a lock to travel to the AUS Semi final in November where they will meet their eventual demise.

4. Mount Allison Mounties
Many AUS football observers believe the Mountie’s season was a losing battle before it even began.

Shortly before the 2009 campaign was to start, Mount Allison discovered they would be without the services of stud Quarterback Kelly Hughes.

It was fun the last several seasons watching Hughes and dynamic receiver Gary Ross valiantly lead the plucky Mounties, slowly but surely establishing Mount Allison as a force to be reckoned with, restoring faith in the Sackville that meaningful football games would be played on campus once again.

The Mounties always play with a great deal of pride, and they will be tough to beat at home. They may very well get a win this weekend versus perennial Quebec bottom feeders, the Mcgill Redmen.

However with 2 games left versus SMU, a game at X, and what should be a merciless thrashing at Laval, there is no reason to believe the Mounties will win more than 2 games this season.

With that said, if they can beat Acadia at home on October 24th, 2 wins may be enough to get them in the playoffs for a second straight year.

Notes
The Eastlink game this weekend is the Huskies homecoming game vs. Sherbrooke. Game time is 2:00 on Saturday……John Moore will be the feature guest on Haligonia Sports this Friday. Mr. Moore is the play by play announcer of the Halifax Mooseheads on 95.7 FM. He also has an excellent new website chronicling his travels and observations with the Moose on a daily basis. Check it out at http://www.sportsandmoore.com/