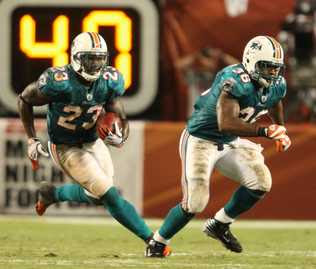 If the NFL considered strength of schedule when rewarding teams with playoff spots, the Miami Dolphins could be in contention this year.
But sadly, this is not college football or college basketball, this is the NFL. The only thing that matters is “dubbyas”, or as Al Davis once proudly said, “Just win baby.”
Last season the Dolphins rode one of the easiest schedules in the league to an 11-5 season, and a home game in the First round of the AFC playoffs.
The fish benefitted from 6 games versus a weakened AFC East, with Buffalo falling apart by mid October, the Jets crumbling down the stretch, and the Patriots having the uneasy task of being the first team to face Miami’s wildcat offence in week 3.
The AFC East was matched up with the two worst divisions in football, the NFC and AFC West, giving the Dolphins 8 games versus teams with a combined 2008 record of 45 wins and 73 losses.
The Dolphins 2 open games were actually fairly tough; at Houston, versus a Texans team that has one of the best home records in football over the last several years; home to the Baltimore Ravens who finished the season 11-5 and played in the AFC championship game. The Dolphins lost both.
In total, Dolphins opponents in 2008 won 91 games, while losing 117. That’s a far cry from the Super Bowl champion Pittsburg Steelers, who faced the toughest schedule since the 1976 New York Giants en route to their NFL championship.
Even with the watered down schedule, the Dolphins barely beat weak sisters like Seattle, 21-19 at home, Kansas City 38-31 at Arrowhead, the woeful Oakland Raiders 17-15 in Miami, and the hapless Rams 16-12 in St.Louis.
Give credit where credit is due however. The Dolphins did win, and they also beat legitimate teams like San Diego and New England, while taking care of business against lame ducks like the Jets and Bills.
This season, however, making the playoffs will be no small task.
The Dolphins are now 0-2 after losing one the most bizarre games in the history of the NFL on
Monday night to the Colts. Despite having possession of the football for 45 minutes, Miami still lost to Peyton Manning, Pierre Garcon (as a Canadian, I love that name), and an exhausted Indy defence.
Next up for the Dolphins is a cleverly planned game by the NFL scheduling committee, making the Dolphins travel coast to coast to play a Chargers team that has yet to play a game of good football but still has a bevy of talent for embattled Head Coach Norv Turner to work with (or not screw up). The Chargers will be fired up to gain a measure of revenge for the Dolphins beating them in San Diego last season.
Then three home games in a row beginning with the improved Buffalo Bills, followed by the new attitude New York Jets, and finishing with the New Orleans Saints who look like they could put up 40 points on the 1975 Steelers.
The fish then go on the road to play at New England, and finish up their home and home with the Jets.
It is conceivable that the defending AFC East Champions will have anywhere from zero to two wins at the midway point of the 2009 season.
After that it does not get much better, with road games at Buffalo and Tennessee, and a season finishing match up with the Super Bowl champion Steelers in Miami.
The good news; the AFC East is matched up with the NFC and AFC south, giving the Dolphins 3 games versus teams that would appear to be on the downside or rebuilding, and a home game versus Houston which many pundits believe are ready to take the next step, despite their unimpressive loss to the Jets in week 1.
The combined 2008 record of Miami opponents in 2009 is 125 wins and 83 losses. That is a 34 game win/loss differential when compared to opponents in 2008, (remember the combined record of Dolphins foes in ’08 was 91-117).
So before Dolphins fans get too excited about the rest of the season, they need to ask themselves if the Dolphins are actually a better team than last year, or is it the same wildcat based smoke and mirrors show that couldn’t put away the Colts on Monday night.
We should have our answer by the end of October.