As someone who has been through some pretty drastic physical transformations and changes, if there is one very important thing that I insist on doing for my son, is putting in whatever effort and creativity as is necessary to make healthy eating a normal part of his life. I’m not opposed to him having yummy treats that kids should be able to enjoy and will never be “forbidden,” but he will grow up knowing those are “sometimes” treats and not a normal part of your diet.

So far Cameron has been a pretty normal baby where he likes things some days, doesn’t care for them another and I wanted to share with you some of the foods that he is served on a fairly regular basis. My philosophy is that even though plenty of kids prefer plain foods, I’m not going to only give him plain foods “just because.”  If he prefers plain foods as we go along, that’s fine, but right now, he only knows what I give him to try and I’ve walked the line of slowly introducing lots of flavour into this food while not offending his developing little palette. Texture seems to be the biggest challenge, but like anything else, it depends on the day.

So here we go…

Cameron has fed himself from about 8 months+ on most things. I will spoon feed him things like yogurt or soupy things and if we were out and about, I would still often bring along a homemade puree that includes a bean or a chicken protein simply because it’s easier and less messy when we’re out and about, but we seem to be getting away from any spoon fed puree combinations now.  He always wants to have something to feed himself at the same time too and I’ll just offer him spoonfuls as he goes. The purees could be a combo of:

My boy LOVES eggs, just like his Mama! Breakfast is the one meal of the day I can count on that he’ll eat the most of and I don’t worry he’s “not eating enough” for the day if he only eats a few bits of his lunch and/or supper.  I believe he’ll eat if he’s hungry, but you know Mamas worry just a little if they hardly touch their food ;-). If he’s not already tugging at my pant legs when I’m making him his eggs, he makes a beeline for his highchair when he sees me putting it on his tray. Although now that he’s teething his molars coming in, I do notice that his appetite for solids is gone down and milk back up but I’m sure it’s temporary.

For a while I was playing it cautious only giving him a scrambled egg yolk avoiding the potentially allergenic egg white, but one day I decided it was time to try the white and it was a success (I think he was around 10 months when I did that). Phew! It makes for much fluffier scrambled eggs and easier for him to pick up.  I usually also add some old cheddar & some sort of sneaky green like slivered baby spinach or leftover broccoli cut up finely:

“Cheerios” (I normally buy “Whole O’s” instead) are more of a snack food, but occasionally I’ll give him a handful of them while I’m preparing whatever else. And this particular morning, for example, he had cheerios and I made him oatmeal with apple sauce & cinnamon (no picture).
I have no reason to believe that he will have an allergy to nuts, but I’ve so far been too chicken to try him on it. I dunno, something about anaphalactic shock scares me, so you can bet we’ll be in a public place nearby emergency medical care when I do! (crazy mom alert!) Until then, I have given him sunflower seed butter which to my knowledge is an alternative for people with nut allergies? Either way, he loves it.
Lunch

In general, lunch and supper are pretty interchangeable, but I often give him more “sandwich” type foods at lunch.  He’s a big fan of hummus sandwiches (sometimes I sprinkle cheese on the hummus)

and….wait for it….sardine sandwiches! Before you all go “ewwwww,” sardines are an extremely rich source of Omega 3’s (brain development) and are a VERY safe source with very little mercury risk.  If you like tuna, you most likely will like sardines. Don’t knock it til you try it. 😉  It’s one of his favourite lunches! I just make sure to buy the sardines packed in water and there is very little sodium in those.

I also smeared guacamole on his sardine sandwich (in between 2 slices of whole wheat bread) and he gobbled it up like it was going out of style.

Even though he feeds himself, I still keep pureed bean/lentil cubes on hand in the freezer (I prepare them from dried about once a month and freeze them into cubes) and I use them as “pasta sauce” as a protein source. I suppose you could use any cube combinations for this purpose too, but I find the bean ones are thick enough to be just right.  I just melt a few cubes & stir into the pasta (chickpea+garlic+EVOO is a combo I find is a really great one).  I like to use vegetable pastas that are colourful and “fun” (Eden Organic Vegetable Spirals are a good one) but I didn’t get a photo of that for this post.

I finally decided to try making kale chips because I’ve heard about them countless times and I never in a million years thought they would be good and the thought of them had NEVER appealed to me, but for some reason one day I thought what the hell I like living on the edge 😛 and threw a bunch of kale in my cart. It is a superfood afterall, I told myself. All I can say is I’m in LOVE! “I loooove kale chips and I don’t care who knows it!” 😀 They actually do get super crispy and I could sit there with a bowl full of kale chips watching a movie! lol Totally serious. So I figured I’d put a few on Cameron’s plate to see what he thought of it. 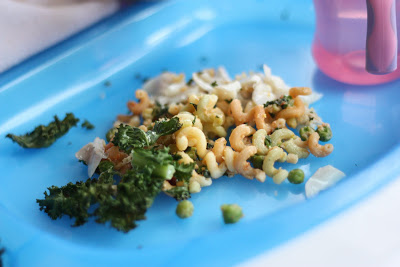 They are super easy to make, just remove the leafy part from the tough stem, wash, pat dry, tear into bite size pieces and place on a baking sheet sprayed with oil (make sure not to crowd them on the sheet), drizzle some EVOO over top and sprinkle with sea salt (the sea salt makes ALL the difference). Bake them in a 350 degree oven for about 10-15 minutes until the edges are brownish. I figured out that I like them pretty crispy and the crispier they are (and less chewy), the less bitterness there is. And surprisingly, dipping them in ketchup is pretty good too. (I can’t believe I am one of “those” people who eats kale chips. lol)

He almost always gets some sort of fruit and/or yogurt for dessert, whatever is in season: strawberries, raspberries, watermelon, roasted apples with cinnamon or mandarin oranges from a can/jar (one of his favourites), peaches, pears, bananas etc.  In general I make a serious effort to buy as much organic as possible so most of the foods Cameron eats are organic for the most part, but if it’s not available in organic, I will buy the conventional.

As I mentioned, I often will serve him the same types of things for lunch/supper, but more typically, I try to get more veggies in too. I made this chili.

The funny thing about the chili is that he ate it all up the first time, but then wasn’t a fan with the frozen leftovers. I tasted it and it tasted just as good as when it was fresh, but he doesn’t tolerate the textures of meat very well at all. So I’m back to doing some creative experimentation on serving him meat. Do you have any suggestions for me?  Even though he ate tons of slow cooker chicken + sweet potato + apple purees, no luck on having him eat the chicken whole yet, but for a very few select tiny bites of my food.

He also isn’t a huge fan of whole beans. He didn’t eat much of this dinner if I remember correctly.

I made a batch of Mama Peas Zucchini Quinoa Lasagna and he gobbled it right up the first night, but didn’t want much to do with it the next day.

One of my own favourite “healthified” comfort foods is Annie’s Mac & Cheese and what kid doesn’t love mac & cheese? I throw in some broccoli in with the pasta while it’s cooking and stir in a dab of butter, plain greek yogurt & a splash of milk with the cheese packet and it makes it all creamy good and packs much more nutrition than straight from the box: 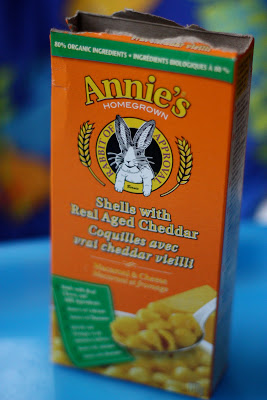 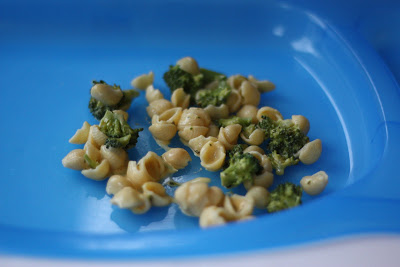 He was quite skeptical about fresh ravioli but he warmed up to it after a few bites.

I will usually make a cheese sauce or just sprinkle old cheddar on top of it while it’s warm.

Other than his three meals, he’ll have a few snacks too. I’ll usually fill his snack cup with “cheerios” or some cookie type snacks (baby graham crackers etc) that will fit in his cup and he can sit on the floor and eat (unless Lucy hears his cup shaking and then you know what happens 😀). He likes these Wellington crackers (like Breton but organic and multigrain), cereal bars (any kind).  If we’re out and about I’ll give him a Baby Mum Mum or a Toddler Mum Mum as a treat in his stroller.

I bought the Annie’s brand of “goldfish” yesterday and gave him one to try expecting it to be no problem at all and he choked on one and scared the bejeezus out of us. I had to turn him over and was about to pound his back over my knee when it came flying out on the floor. THANK GOD. Mother’s worst fear right there! I was all business while it was happening, but I couldn’t shake the nervous jitters for a while after that!  So I think we’ll hold off on giving him those until his back molars come in?

Do you have any suggestions for baby/toddler meal/snack ideas? I’d love to hear your suggestions!