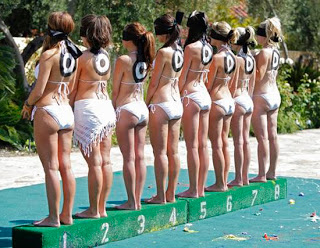 Hello again, folks! The second episode of Bachelor Pad was on last night, and whether you watched it or not you’d better read this recap. Let’s get started!

Do any of you have big summertime BBQs or family reunions coming up? Perhaps a child’s birthday party? Well, skip the bouncy castle and take a cue from Bachelor Pad when it comes to the activities, because the challenge this week was a doozie. First, all the guys lined up with targets painted on their backs, while the women came out one by one. The women were asked a question like “Who do you want to see go home this week?” and then had to throw a paint-filled egg at their desired target (Jake, mostly). If they missed (and so many of them -coughViennathesoftballplayercough – did) they were out, if they hit they scored a point. The woman with the most points at the end won a rose. And who was that? Crazypants Melissa!

Next the women lined up, and poor Princess Erica got nailed time and time again as Chris Harrison (wearing a bizarre Brokeback Mountain style shirt) asked the men “Who are you least attracted to?” Ouch. Erica was hurting, and you know what girls do when their self-esteem plummets? They bash someone else! Yes, Erica immediately started whining about how she can’t believe the guys threw eggs at her because Ella is, like, way fatter and uglier. Good God. I really hope no one lets their children watch this show. That disgusting display of low self-esteem is far more offensive than any sexual content. Insecure cattiness should come with its own parental warning.

Michael won the competition for the guys, and both he and Melissa got to choose three people to take on dates

Michael was feeling guilty about whipping an egg at Erica at lightning speed, so he chose Erica, his ex-fiancee Holly, and Michelle to accompany him on the date. And what a romantic date it was. As if the personal tensions weren’t uncomfortable enough, the foursome were taken to the abandoned “Linda Vista Hospital”. Michael assured as that some crazy stuff had gone on there – he read it in a book, you guys! Mostly, I just couldn’t believe someone on the Bachelor Pad cast had read a book.

Michelle knew she had no hope of getting the rose on a date with a guy and his ex, so she instead made it her business to interrogate both Holly and Michael about their feelings for one another. Finally, the two went to speak privately. It was awkward. Holly told Michael “I still don’t really know why you broke up with me.” Geez. Clearly he was the smart one in the relationship. You called off the wedding, sweetheart! I’m gonna go out on a limb and say that’s somehow connected. Many tears were shed (mostly by Michael), but he still gave Holly the rose.

Next it was time for Crazypants Melissa’s date, and she chose Kirk, Kasey and Blake to join her. Wow, have a type much, Melissa? Like you weren’t already crazy enough, now it seems as though you’re only attracted to dudes who look like they could be your brother.

Melissa was just trying to strike a deal with Vienna’s man, but she did have her sights set on Blake. And he couldn’t have been less enthusiastic, telling the camera that he’d play along and act like he was into her just to stay in the game. Apparently playing along meant actively leading Melissa on and making out with her just to get the rose. “I kind of have to whore myself out here,” Blake told the camera, as you could practically see him cringe at the idea of kissing her. This guy is a dentist! A professional! How is he going to face his patients or co-workers after acting like such a slut? I wouldn’t let the guy anywhere near my mouth after seeing this.

Blake’s act worked on Crazypants – she gave him the rose and followed him around like a sad puppy for the rest of the episode.

Back at the house, Vienna was engaging in her favorite activity – bashing Jake to anyone who’ll listen. Jake knew his days were numbered, so he decided to ask Vienna for help. Ay-yay-yay. Come on, Jake. She’s not going to help you. In fact, Vienna wouldn’t even speak privately with Jake without Kasey there to guard and protect her heart.

While Jake was trying to get his arch-nemesis to save him, Gia was trying to convince Graham to save her and get Vienna out. Apparently Gia and Graham are friends in real life, so she thought she could trust him. She mapped out everyone left on the show just to illustrate how Vienna and Kasey were the power couple who needed to be broken up. I don’t think she needed a pen and paper to explain that one, but the girl did have a point – it seems like all strategy on this show gets run through Kasey and Vienna first.

Meanwhile, Blake was laying in bed with Holly. Yes, Melissa’s new boyfriend and Michael’s old fiancee are flirting, and no one is happy – especially not Melissa. In fact, she hopped into bed with them. After all, Blake had told her their relationship was “serendipitous”, so she had to protect it. Later, Melissa freaked out even more because Blake was talking to Holly. Their conversation went like this:

Blake: “I’m trying to have a conversation and if you want to get emotional…”
Melissa: “I’m not emotional, I’m annoyed.”
Blake: “That’s an emotion.”

Well, Blake, that’s what you get for hitching your wagon to a Crazypants. Melissa said she came on Bachelor Pad to prove that she’s fun and awesome. Unfortunately, she’s coming across as even crazier than before. Sorry, Melissa, maybe you can talk to Jake about what you need to do to get a good edit on this show. Also, can we discuss for a moment how Melissa looks like a crack addict? Her hair is stringy, her face is gaunt, she’s skeletal skinny. If she’d been on the haunted hospital date, I think Michael might have confused her for a ghost.

With Kasey back at Vienna’s side, Jake once again approached her to talk. In front of Ella and Kirk, he asked Vienna to do him a kindness and keep him safe. Obviously, Jake didn’t actually expect this to work but the guy is doing his darndest to make sure everyone knows that he’s a good guy and that Vienna’s awful. I think it’s starting to work. He even went so far as to say if he wins the money he’ll give it to charity! As much as that makes me want to puke, I’d rather watch Jake do his nice guy routine than suffer through Kasey’s tough guy act. The PDA with Vienna? The tough guy talk? Flexing his arm to make the heart tattoo on his wrist “throb”? Barf.

Don’t Let The Door Hit You…

Soon enough, Harrison showed up with some news – the men were safe this week and two women would be going home. Both the men and women would vote for a woman. With that news, Vienna basically had a cow. She even turned her fury on Harrison, saying “You guys already forced Jake and I to go on TV and do a national breakup in front of everyone. I don’t think it was appropriate for you to make us do this again.” Luckily, Harrison kept his wits about him and pointed out to Vienna that no one was forcing her to be there. And really, come on, Vienna – you knew Jake would be on the show. You’re dumb, but you’re not that dumb.

In the midst of all this, Kasey took Gia aside and told her that Graham had informed him that she was trying to get him and Vienna out. Really, Graham? Why? Why would you do that? Look, Gia is a crybaby but she was right about needing to break up Kasey and Vienna. Why are those two running this game? Gia started sobbing about how she’d thought Graham was her friend, and how everyone was so sneaky, and she wanted to leave. Blah blah blah, we’ve heard this all before, right? Nope! Gia actually packed her bags, threw on an adorable leather jacket, and left. (See Vienna? That’s how it’s done.) She told Chris Harrison this show just isn’t for her – funny how it took her two appearances to realize that, huh? What are the odds that we’ll see her on Bachelor Pad 3?

Since Gia left, only one girl needed to be voted out, and both Ella and Jackie were on the chopping block. Since Kasey seems to make the final call on basically everything, I found it difficult to understand who wanted who out. What we did see was Ella basically beg everyone to keep her, because she really needs the money. She made something of a deal with Kirk, since he also needs the money (beating mold means medical bills, guys!) and he advocated for her.

Unfortunately for everyone, the swing vote ended up being Crazypants Crackhead Melissa and she was way more concerned with her “serendipitous” relationship with Blake than with the actual game. She sobbed and sobbed, and the other girls comforted her like they were in the gym bathroom at a middle school dance. Blake wanted to keep Jackie, she was mad at Blake, so Jackie was out. Congrats, Ella!

Let’s take a moment to review the horrific fashions of the rose ceremony. Erica was wearing some brutal pink get-up that just reminded us all of what a terrible Paris Hilton impression she’s doing. Holly was wearing a flouncy, short tutu that no one over the age of 23 should be caught dead in. Vienna looked as though she borrowed her dress from a ten year-old flower girl. Michelle had on a pub crawl T-shirt, a floor-length skirt, and a ton of pearls (probably from the dollar store). 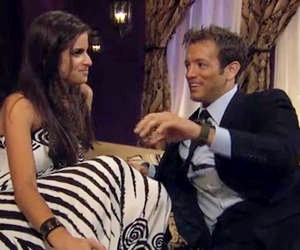 Jackie was eliminated and Ames walked her to the reject limo, dressed in his Andy Bernard red pants. They kiss goodbye, and Ames wanders back to the party looking incredibly confused…and then he quit! Yep, Ames waved goodbye, chased after the limo, and jumped in. As far as Bachelor Pad goes, it was pretty cute. Both Ames and Jackie seemed too classy for this show, and don’t need the money, so it was nice to see them ride off together with a shred of dignity.

What do you think, will Jackie and Ames make their week-long romance work in the real world? What do you think leads to Jake making out with Erica next week? Are you rooting for any of these people to win the money? Tell me in the comments section!