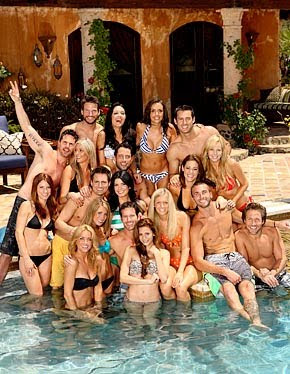 The latest and raciest installment of the Bachelor(ette) franchise debuted last night, and it was really something. It’s one part Bachelor(ette), one part Big Brother, one part Temptation Island. And one thing’s for sure: it definitely doesn’t need to be two hours long.

But two hours long it was, and it was time well wasted in my opinion. Watching beautiful people play Twister, cry over unrequited love and sob over scary/crazy/potentially dangerous roommates (all while trying to win a grand prize of $250,000) is exactly what you need at the end of a long Monday. Sure, I now feel the urge to listen to some extra NPR podcasts, pour over international news headlines and complete the Saturday New York Times crossword puzzle just to make sure I didn’t lose too many precious brain cells during my viewing of Bachelor Pad. But that’s OK. Smart people who only ever do smart people things aren’t smart, they’re boring.

Caught in a Bad Romance

Basically, Bachelor Pad has brought back some of the most memorable bachelor and bachelorettes of years gone by to live in yet another California mansion, spend 90% of their time lounging by the pool, and compete in inane competitions for roses. The roses make contestants safe from elimination. Each week the girls vote on a guy to eliminate, and the guys vote on a girl to eliminate. Oh, and don’t forget – they could find love! Or chlamydia. Possibly both.

I haven’t watched all the season, so some of the faces were foreign to me. But luckily there were a lot of familiar faces too, like crazy-eyed Michelle, manipulative kiss-me-don’t-kiss-me Elizabeth, cute Canadian Jessie, Miss Disney Princess Tenley, and gorgeous Gia, all from Jake’s season. The contestants came out of the limo one by one to greet Chris Harrison, and immediately started drinking mimosas and sizing up the competition. Tenley squealed for basically everyone. Weatherboy fretted over the possibility of Craig M. showing up. The possibility of Weatherboy finding love on this show is about the same as the possibility of me not rolling my eyes and sighing after hearing one of his weather puns. Even Tenley could only muster “Poor little Weatherman. He just seems like a guy who needs a hug.”

The best thing about this show is that over the years of the Bachelor(ette) being around, ousted lovers have been meeting up across the country for “reunions” (which basically just sound like slutty vacations). So many of the contestants coming into Bachelor Pad have history. Elizabeth loves Jesse Kovacs, but he’s just fooling around with her. Nikki and Juan had a brief fling, but he either slept with someone else while on vacation with her, or slept with her to avoid paying for a hotel in Chicago. Or both. Probably both. Tenley and Kiptyn have met and are adorably eying one another. They might be the only people on the show who could believably fall in love, but Natalie and (tattooed) Jesse are giving them a run for their money. Within seconds of meeting each other it seemed they were making out and whispering sweet nothings at the camera/into each other’s ear.

Twister was actually pretty funny. Gia cried out “Can someone come and pull up my top?” and about four guys got knocked out of the game because they fell over trying to catch a glimpse. And a few chicks as well. The game came down to two Canadians (we know how to twist!), Jessie and Craig. Craig won and was then safe from elimination, which foiled the ladies’ early plan of sending him home as payback for making Weatherboy cry.

As the winner, Craig got to take three women on a date the next day. He’d give one of those women a rose during the date, and she would also be safe from elimination. Let the whoring around begin! I never thought I’d hear people say things like “Would you make out with Craig M. for a rose?”, but alas, I now have. Michelle went the farthest and climbed into bed with Craig that night in hopes of getting selected for the date the next day. Tenley spotted it and told everyone, which really unleashed the crazy in Michelle. Her plan backfired, as well. When the date card arrived (Along with the table, which Jessie also carried into the house. Why not pick up the card and leave the table outside?) Craig chose his Twister runner-up Jessie, his “nemesis” Elizabeth, and the girl with question marks for her age, Gwen. However old Gwen is, nothing could be worse than having question marks as an age. With question marks, everyone assumes the worst. Craig won some bonus points for not choosing Michelle to go on the date. Only in the universe of Bachelor Pad would someone earn brownie points by refusing to take a girl they’d (allegedly) slept with on a date. Craig prepared for his date by spritzing 5 times as much cologne on than what it socially acceptable, and the ladies prepared for the date by hopping into the limo wearing only their bikinis.

She Can’t Make Him Love Her

Michelle might be crazy (we’ll get to that later) but Elizabeth might be even crazier. After repeatedly calling Craig out on being mean to Weatherboy and whining about how she didn’t want to go on the date, she manipulated Craig into choosing her for the date by cuddling up with him and cooing “Why don’t you win me over?”. She continued the flirting on the date and was furious when Craig chose to give the rose to Jessie. It was a smart move – giving a prize to the runner-up in a competition usually doesn’t offend anyone. But Elizabeth is not anyone. While Craig and Jessie awkwardly danced at a private concert, Elizabeth sulked in the limo over her failed flirtation.

She quickly got Craig off her mind back at the house, because she was too busy trying to manipulate her fake boyfriend Kovacs into loving her back. How many times can someone say “I’m totally in love with you” and get no response before he/she stops? It was so embarrassing! Elizabeth told Kovacs that if he treated her poorly she’d make the game hell for him, and once she did she told him the only way to win back her minions was to tell everyone he was totally in love with her. Seriously, this is one crazy chick. I don’t know what’s worse – her bottle blonde hair, her sun damaged skin or her desperate attempts at manipulation? She tried it with Jake and it backfired. She’s trying it with Kovacs and it’s backfiring. When will she learn?

Elizabeth wasn’t the only girl in the house with a case of the crazies, though. Michelle was so crazy on Jake’s season that her name is now synonymous with crazy, and her behavior on Bachelor Pad hasn’t done her reputation any favors. She was furious that Tenley told everyone she’d hooked up with Craig, so she cornered Tenley in the bathroom and confronted her. Nobody puts baby in a corner! Or Tenley in a bathroom! There was a lot of shouting and cursing in the bathroom (none of it from Tenley) and finally Tenley escaped to go sob about how scared she was. And she was comforted by Elizabeth, of all people! That’s like running to Lindsey Lohan for help after Amy Winehouse tries to stab you with a needle.

Once elimination time came, there was a lot of hectic strategizing going on. It was like Survivor, only drunker and stupider. Should the girls eliminate one of the strong or smart guys? Well, there are no smart guys, so that leaves the strong ones – and Natalie doesn’t want her boyfriend Jesse getting the axe! Should they eliminate some drama and get rid of Kovacs? No, because Elizabeth hasn’t won his love yet. She needs about another 200 years to do that. Should they eliminate the girl with the name that sounds like Crystal Light? No, because she’s boring.

In the end, it seemed like the girls had a say in both votes. The guys eliminated Crazy Michelle, on behalf of Tenley, no doubt. Locking that girl in a bathroom and making her cry is pretty much on a par with running over a kitten in your car or interrupting one of Taylor Swift’s award acceptance speeches. The girls eliminated Juan, obviously on behalf of Nikki. He’d tried to apologize to her for “kind of being a dick” earlier, but unlike Elizabeth and Kovacs, Nikki saw right through the insincere apology.

The debut episode closed out with a few zingers from Weatherboy (did he practice his jokes before coming on the show?) as he told the camera “There just weren’t enough roses for all of Michelle’s personalities” and “You can’t pin a rose on a straightjacket”. Personally, I’m already hooked on the show. I can’t wait for more tears, more hook-ups, and more crazy.