I was really excited for my my meal at Bear Reatuarant. Some friends of mine, who had lived in Hali until last year were in town and they had missed the opening of Bear. They were pumped for their last meal in the city and decided that it would be at Bear.

When we arrived, we were seated in a comfy booth and started to make some decisions. My favorite way to eat is to get a selection of small plates, or in this case, appys. I love the anticipation of getting one savory dish, all the while knowing that another is on its way! We placed our orders and waited for dinner to arrive. While we waited, they brought over a selection of breads to choose from- I went with the tea biscuit- one that would put up a fair fight vs. Craig Flynn’s at Chives….actually, I’ll be honest- I had two! 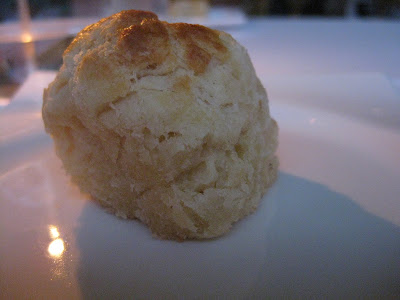 Our server provided us with an amuse bouche, tender duck confit w/ tangy goat cheese and blueberry on a baguette slice. 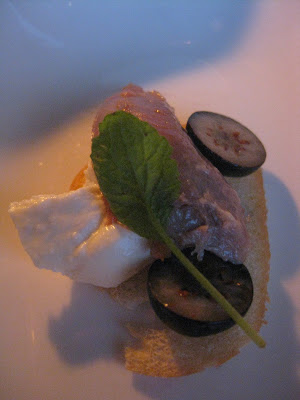 For a first course, my friend and I both ordered the calamari, deep fried and served with Chef Ray Bear’s own BBQ sauce. This dish looked great; a big pile of calamari for a hungry girl. Chef Bear’s BBQ sauce paired perfect;y with it’s deep, smokey flavour. However, I was a little bummed when I realized that the calamari was getting chewier with every bite. 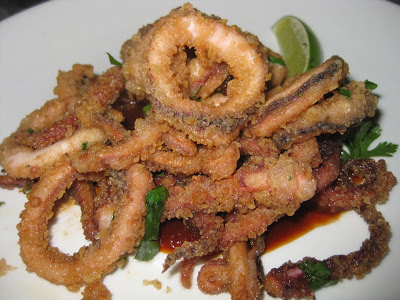 For my next course, I had the Bacon-Lobster Mac ‘n’ Cheese. Now here was a dish that I could get excited about! Though I don’t normally order pasta in restaurants, there was no way that I could let this dish pass me by! A creamy mac ‘n’ cheese, ramped up with tender lobster and salty bacon? Yes please. You can imagine my disappointment when I realized that this dish was not gonna cut it. 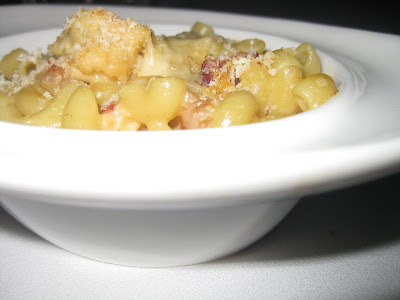 The dish looked delicious – I could tell from first glance that I would be experiencing a rich, cheesy sauce with just a slight crunch from the breadcrumbs on top. Unfortunately, the bacon and lobster- the stars of the dish- really fell flat. It took several chews to determine whether I was actually eating bacon OR lobster, and another 20 to be able to swallow. The pasta would have been incredible by itself, but I was so disheartened at that point that I didn’t really want to finish it.

Altogether, this night out fell flat. Though I was pumped to spend the night w/ my gals, I was less than thrilled as to the mediocre meal. I was even less impressed when I mentioned our expeirence to the manager and his response was “We’ll take care of you next time.” After this experience, I’m fairly certain, there won’t be a next time.