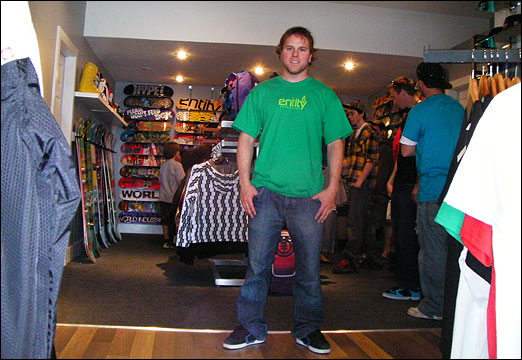 You could say a board meeting took place in downtown Bedford this weekend.

After much anticipation, Entity Boardshop, a new store catering to skateboarders, snowboarders and surfers, opened Saturday and business was brisk.

A steady stream of board-loving Bedfordites made their way through the stylish Bedford Highway boutique grabbing new merchandise along the way.

The front of the store features board-oriented fashions for both men and women, including T-shirts, hoodies, hats, shoes, shorts, bikinis, watches and sunglasses.

The back of the shop gets a little more hardcore with an area dedicated to skateboard decks and wheels as well as snowboards and boots. (The store is not carrying surf equipment at the present time.)

Entity Boardshop is the brainchild of 27-year-old Dartmouth native Rob McLeod, a competitive snowboarder who has been featured in films. He’s also an avid skateboarder.

“Snowboarding is a lifestyle as much as a sport, which falls in the same line and respect that skaters and surfers give their sport, which makes all three sports go hand-in-hand,” said MacLeod.

Entity Boardshop is located at 1270 Bedford Highway. Although the store is now open, MacLeod will be hosting a Grand Opening celebration in early to mid-summer.