Booklist has chosen its top picks for 2015. Here they are!

“From the National Book Award-winning author of Just Kids: an unforgettable odyssey into the mind of this legendary artist, told through the prism of cafés and haunts she has visited and worked in around the world. M Train is a journey through seventeen “stations.” It begins in the tiny Greenwich Village café where Smith goes every morning for black coffee, ruminates on the world as it is and the world as it was, and writes in her notebook. We then travel, through prose that shifts fluidly between dreams and reality, past and present, across a landscape of creative aspirations and inspirations: from Frida Kahlo’s Casa Azul in Mexico, to a meeting of an Arctic explorer’s society in Berlin; from the ramshackle seaside bungalow in New York’s Far Rockaway that Smith buys just before Hurricane Sandy hits, to the graves of Genet, Plath, Rimbaud and Mishima.” publisher

“From the National Book Award finalist and author of Once Upon a River comes a dazzling story collection featuring ferocious mothers and scrappy daughters. The strong but flawed women of Mothers, Tell Your Daughters love and betray one another; their richly fraught relationships can act as anchors, lifelines, or deadly poison. Bonnie Jo Campbell’s working-class protagonists are at once vulnerable, wise, cruel, and funny, and they are always getting into or out of trouble.” publisher 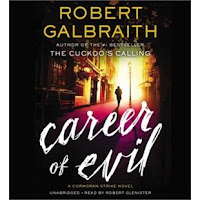 “When a mysterious package is delivered to Robin Ellacott, she is horrified to discover that it contains a woman’s severed leg. Her boss, private detective Cormoran Strike, is less surprised but no less alarmed. There are four people from his past who he thinks could be responsible–and Strike knows that any one of them is capable of sustained and unspeakable brutality. With the police focusing on the one suspect Strike is increasingly sure is not the perpetrator, he and Robin take matters into their own hands, and delve into the dark and twisted worlds of the other three men.” publisher

Symphony for the City of the Dead: Dmitri Shostakovich and the Siege of Leningrad by M. T. Anderson

“National Book Award winner M. T. Anderson delivers a brilliant and riveting account of the Siege of Leningrad and the role played by Russian composer Shostakovich and his Leningrad Symphony. In September 1941, Adolf Hitler’s Wehrmacht surrounded Leningrad in what was to become one of the longest and most destructive sieges in Western history—almost three years of bombardment and starvation that culminated in the harsh winter of 1943–1944. More than a million citizens perished. Survivors recall corpses littering the frozen streets, their relatives having neither the means nor the strength to bury them. Residents burned books, furniture, and floorboards to keep warm; they ate family pets and—eventually—one another to stay alive.” publisher

“The Bunker Diary is award-winning, young adult writer Kevin Brooks’s pulse-pounding exploration of what happens when your worst nightmare comes true – and how will you survive? I can’t believe I fell for it. It was still dark when I woke up this morning. As soon as my eyes opened I knew where I was. A low-ceilinged rectangular building made entirely of whitewashed concrete. There are six little rooms along the main corridor. There are no windows. No doors. The lift is the only way in or out. What’s he going to do to me? What am I going to do? If I’m right, the lift will come down in five minutes. It did. Only this time it wasn’t empty . . .” publisher 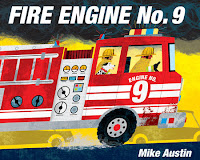 “Told almost entirely in sound words, this day-in-the-life look at firefighters and their fire truck will appeal to the youngest vehicle enthusiasts and to parents with a penchant for exuberant read-aloud sessions. With art reminiscent of Donald Crews’s transportation books, Mike Austin evokes the excitement of a 911 call as we follow firefighters sliding down the fire pole, racing through town, and up the ladder truck. Includes fire safety tips from the Federal Emergency Management Agency.” publisher