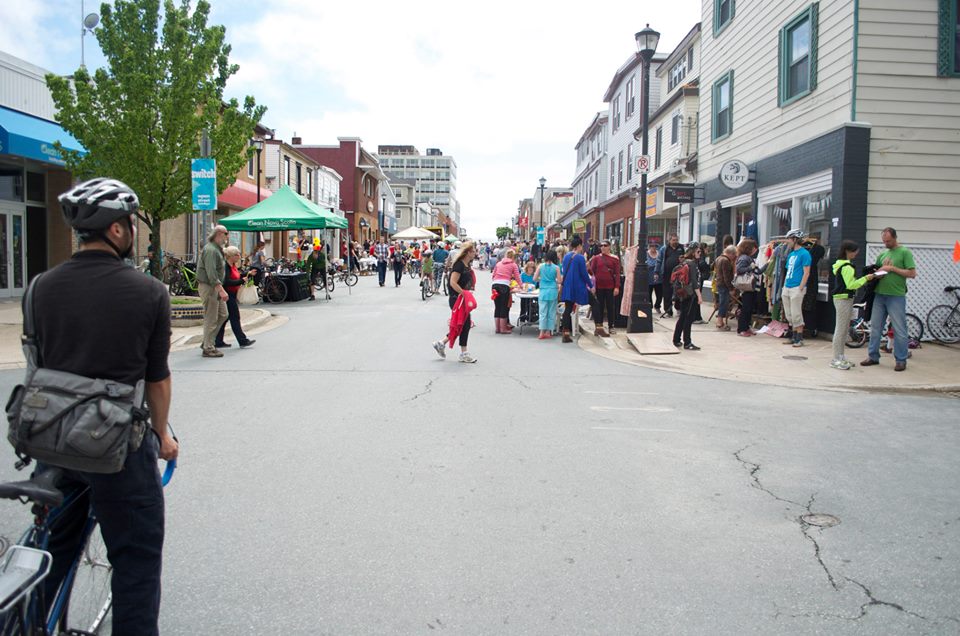 Calling all cyclists and general Dartmouth fans!  The Halifax Cycling Coalition (HCC) is hosting a meeting this Tuesday, December 9th at 6:30 at the Alderney Gate Library to discuss the future of cycling in Dartmouth

HCC co-chair Emily Macdonald  fills us in on what the organization has achieved to date, and why this meeting will be of interest to anyone who loves Dartmouth.

Tell us a bit about what Halifax Cycling Coalition does:

EM: The HCC is a non-profit organization dedicated to improving conditions for cycling in HRM.

Since 2007, our advocacy efforts have focused largely on infrastructure such as the Macdonald Bridge approaches, and the Crosstown Connector, which was eventually installed on Windsor St. in Halifax. We host or contribute to a number of events every year including Bike Week (Bike Fest, Commuter Checkpoints, movie nights), the HCC Birthday Party and SWITCH Open Streets. Education has been an increasingly important focus of ours as other cities across Canada are rethinking how they design their streets and their communities. The HCC has been a part of making sure some of that knowledge reaches the East Coast with public lectures from Toronto’s Chief Planner, Jennifer Keesmaat, and planners and engineers from Vancouver and other cities.

Our next major campaign is all about making cycling much more accessible to everyone. There are many people who are aware of the benefits of biking and would choose to bike but can’t because of personal, social or physical barriers. The OnTrack campaign calls for protected bike lanes and local-street bikeways, which would reduce many of the physical and perceived barriers and instead provide routes that are both comfortable and convenient for people of all ages and abilities.

What successes has the group had in its cycling advocacy to date?

EM: One of the more concrete examples is the installation of the Windsor Street bike lane. This project began with a petition that the HCC brought to City Hall in 2011. The petition called for a Crosstown Connector that would connect North End Halifax to the South End.

What makes Dartmouth ripe for a discussion on improving cycling infrastructure?

EM: Dartmouth is at a point where residents, community members and business-owners are ready to take action and get involved in the planning and design of their neighbourhoods and downtown. The Downtown Dartmouth Business Commission has really stepped up recently and helped to put on SWITCH Open Street events along Portland and Prince Albert. This really shows that they are interested in more than just parking spaces, and they see the benefits of more pedestrian-oriented streets and the life they can bring to the downtown. Community groups like the Wyse Society for Sensible Urban Development is an example of residents pushing for positive change that will lead to more livable neighbourhoods. There was also the huge turnout at the Dec. 1st public meeting on development in Downtown Dartmouth, by far one of the largest turnouts I’ve seen at a public meeting. With all this going on, there are a lot of opportunities to talk about how cycling fits into Dartmouth’s future. Many of our members are Dartmouth residents and we want to help them out and invite other residents to share ideas and priorities.

You’ve titled this event “Beyond the Bridge”.  Explain why you chose that:

EM: “Beyond the Bridge” is a little symbolic. With the re-decking of the Macdonald Bridge, the plan, according to both HRM and HHB is to rebuild the approaches on both sides. The problematic Halifax-side approach – which forces cyclist to ride down from Gottingen to Barrington, only to ride back up the other side to reach the bridge bike path – was a key reason why the HCC formed in the first place. Since this issue is being addressed, we see a great opportunity and huge potential for an accessible network of bikeways that reaches across the entire regional center.

EM: Bike-friendly neighbourhoods and downtowns are about more than biking and it’s not just cyclists that will benefit. In residential areas, local-street bikeways help to slow down cars and help to keep non-local traffic from using residential streets as shortcuts. They help to create safer streets by slowing down traffic to 20-30 km/h, using traffic calming tools. For businesses, bike-friendly means more customers. Cyclists are able to stop in front of any shop without the need for a 20’x10′ unoccupied parking space. They also tend to visit stores more frequently and, overall, will spend more money since they have more disposable income than car-owners. For pedestrians, it means greater separation between car lanes and sidewalks, reduced vehicle speeds and a safer environment in general. Bike-friendly means young people can get around easier on their own, without parents having to drive them.

We know what neighbourhoods and downtowns look like when the no. 1 priority is moving cars. In the past, planners and engineers alike underestimated the cost that it would have on our everyday lives, our health, local businesses… the idea of being bike-friendly is one way of reintroducing these other priorities, and I’d like to think that it’s something that lot’s of people, not just cyclists, could agree with.

Who should come to the meeting? How can people get involved if they can’t come?

EM: Everyone is welcome. A main goal for the night is to identify some priorities for Dartmouth in terms of infrastructure, bike-culture, education, and advocacy. We’d like to get as many people as we can to take part in this process.

The Tuesday event will be just one of many opportunities for people to get involved in cycling advocacy in Dartmouth. We know that some people won’t be able to make it so we’re going to post the ideas and priorities that people come up with on our website (cyclehalifax.ca) and we’ll keep the conversation going online.

Eventually, we plan to facilitate a working group in Dartmouth that we can work with and support by sharing our knowledge, experience and resources. Anyone who is interested in being a part of the working group, or volunteering on a more casual basis can let us know by emailing contact@cyclehalifax.ca. Volunteers will be invited to attend a training session on January 13, 2015. We’ll have more details about the training session on the website.

Beyond the Bridge: Talking Dartmouth Cycling on December 9th
https://haligonia.ca/beyond-the-bridge-talking-dartmouth-cycling-on-december-9th-100485/