Last year I was invited to participate in the Downtown Halifax Business Commission’s Big Day Downtown campaign. I guess they liked what I posted because I was invited back this year. Only there was a twist. All the participating bloggers were asked to “try something new.”

Where last year I just kind of winged it with the in-laws, this year I actually had to come up with a course of action. Since I naturally narrowed it down to food experiences, I had to think long and hard about where I was going to spend the $100 prepaid credit card that comes with the opportunity. I’m pretty adventurous when it comes to food and while looking over online menus I thought my options would be limited. While getting my hair done  before heading off on my Big Day Downtown, the amazing and lovely Pam at Aspirations helped formulate a foodie plan of attack. 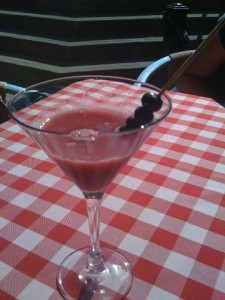 First stop: The Bicycle Thief. Sadly they were not open at the time Cokebaby and I headed down to the waterfront. We still have plans on checking this spot out though. Had they been open our plan was to try their polenta board and cocktails. Instead we went to Ristorante a Mano for appetizers. He had a Campari & soda to start. I asked the very helpful and friendly server for a unique recommendation and she came back with a Raspberry Frizz: a cocktail made with Bacardi Razz, Chambord, Raspberry sorbeto, and Prosecco float. 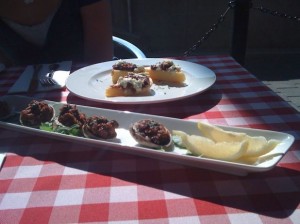 The appetizers were very tasty. Vongole Gratinate: Clams stuffed with housemade Italian salsiccia, baked, served on half shell ($9). Truth be told, the only time I’ve ever eaten clams has been in deep-fried strip form with a side of fries. These were a far cry from their fast food cousins. We also shared the Polenta con Salsa di Fichi e Formaggio Caprino: Polenta rustica with caramelized onions, fig relish & goat cheese, baked al forno ($11). Even though I’ve been to Italy a couple of times now and have had incredible food experiences, polenta was not among them. In fact, the only time it’s crossed my palate has been in the form of those pre-made rolls at The Italian Market. I know, I know. My bad. It’s clearly what Velveeta is to cheese.

Delicious as this first course was, the real adventure took place at Bistro Le Coq, the new French restaurant on Argyle Street. Having travelled to Paris and the south of France a couple of times now, I was excited to see what this place had to offer. The atmosphere is perfect. There are three sections—bar, lounge, dining room—each with a distinct decor. It’s amazing to see that they were able to completely transform the old Mosaic space.

The staff are all fluent in French and they just look charming in their black and white uniforms. You’re greeted in French and offered seating in any of the three areas to suit your mood. We headed to the dining room which is done in a modern country kitchen style. To start we each had a cocktail from their very interesting bar menu. Here, I will admit to being a lame blogger because I forgot to write the names down as I expected to find the items online after. All I can tell you is that Cokebaby’s drink tasted like the most refreshing iced tea and mine had a lovely pear liqueur. 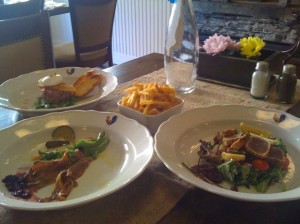 When we asked our server for recommendations, she listed a number of items rather than the blanket “everything” statement that is so unhelpful. That said, I really wish I could have tasted a little bit of everything. Since that wasn’t realistic, Cokebaby and I decided to share a few plates.

Duck prosciutto: house cured duck breast, berry compote, our pickles ($9). Cokebaby doesn’t even like pickles yet he was so impressed with these ones that he MADE pickles the following weekend. Apparently the new brunch menu includes eggs Benny made with the duck prosciutto and, believe you me, I will be coming back for that.

Classic steak tartare: topped with a soft poached egg, truffle oil drizzled crisps ($12). Here’s where I’m going to pause for a second because, let’s face it, steak tartare? The very idea has always grossed me out a little. I mean, sushi’s one thing but raw cow seems like tempting the gods of food borne illnesses. However, I was on an adventure. First thing’s first: I was expecting hamburger meat. What I got was high quality, lean steak that was hand ground. The egg was perfectly poached and oozed over the meat to create a subtle combination of flavours. The texture, in fact, was no different that sushi.

Salade Niçoise: with seared rare ahi tuna crusted in sesame ($10). I am a huge fan of this type of salad. There are different variations of ingredients depending on the chef but my favourite includes boiled potatoes which this one had. While I wouldn’t go so far as to say it was disappointing—I mean, the Ahi tuna was seared to perfection—this dish was probably my least enjoyable part of the meal. For starters, the olives weren’t Niçoise style. The dressing was a little bland and missing the zing of Dijon mustard. It really needed anchovies, too. For a salad it was lovely, just not what I expect in a Niçoise.

Pommes frites: done in duck fat, sprinkled with parmesan, truffle mayo ($7). Enough said, right? Decadent beyond words but oh so very good. If you’re just visiting for cocktails and snacks, don’t miss out on these.

The plan was to head to The Middle Spoon for dessert. Honest it was. This was the location of the Big Day Downtown launch and I was hoping to finish where it all began but…our server mentioned their soufflé: chocolate & Grand Marnier cream ($8). I’ve never had soufflé. How could I resist? Kudos to her for mentioning it would take 25 minutes to make and giving us enough of a heads up so we wouldn’t have to wait too long. We finished off our evening with an espresso each ($3.50) and a soufflé that was like cocoa clouds with a touch of orange. Sorry, there was no time for pictures. You’ll have to trust me when I write it was worth the wait.

One final purchase I have to mention in my “try something new” adventure downtown: the Honey Lavender Ale from Garrison Brewing Co.: Brewed with English lavender harvested from Meander River Farms and wildflowers honey from G.G. Smeltzer & Son in Shubenacadie, this strong yet accessible ale features original flavors. At the time of this post they only had a two week supply left so I recommend checking it out. This ale is probably one of the most distinct ones I’ve ever had. It’s no wonder they consistently win awards.

— this quote was brought to you by quoteurl

All in all, another fantastic Big Day Downtown. The new twist provided a challenge but one that I was very happy to meet. My taste buds were quite pleased.