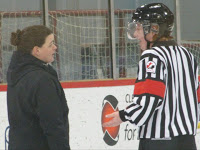 A replay of Bill McLean Sports Show from Tuesday morning on ckdu 88.1 FM is now posted on the Haligonia Sports Facebook group. Henry Whitfield and Steve Betts joined Bill in studio and some of the topics included:

Dalhousie Tigers Mens Hockey– The Cardiac Kids have won 5 overtime games this season and are coming off a weekend where they beat two nationally ranked teams at the DMA.

Dalhousie Tigers Womens Hockey- The Tigers were assessed 12 minor penalties in a loss to Mount Allison. The Mounties were given 1. Tigers fans, players, and coaches were not happy.

Toronto Marlies Fight on Kids Day– Bill weighs in with some heavy opinion on the Marlies fight fest with the Grand Rapids Griffins on Kids Day at the arena which leads to a debate about the role of fighting in hockey.

Citadel High School Football Team– The guys discuss the news of a post championship party at Citadel High that got out of control. Who's to blame? Is it a big deal?

Lebron James Drops the Shoulder on Head Coach– The King puts his shoulder into his Head Coach as he walks by on route to the bench.

Halifax Mooseheads- 7-1?! Plus a preview of the Moose visiting the banished Garrett Clarke this week.

All this and much more, just go to Facebook and type in Haligonia Sports in the search box.