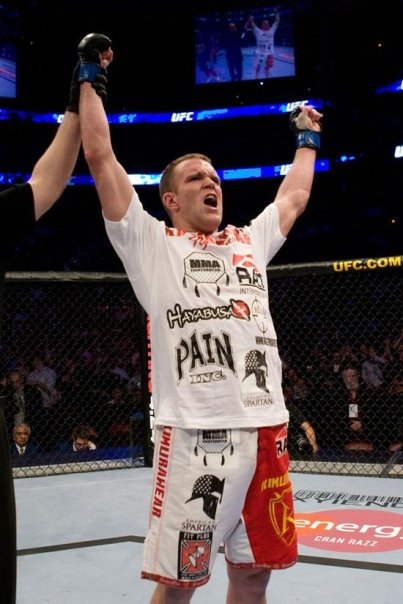 A little over a week away from what he calls the biggest fight of his career, Cole Harbour, Nova Scotia native and rising UFC welterweight fighter, TJ Grant took time to talk to  Joe Osborne about the fight, life in the UFC and a variety of other MMA related topics. Below is a transcript from the interview.

Q – How’s your preparation for the fight coming?

A – It’s coming along great. I’m feeling awesome. It’s what I would call my best training camp yet. I feel that my conditioning is at an all-time high. We traveled down to Brazil for two weeks to train and everything’s coming together great.

Grant will be looking to improve his record inside the octagon to 4-2.

Q– Was that your first trip to Brazil?

A – It was my first time. I’ve made trips to Thailand before and really wanted to get down to Brazil. I was gonna do it whether I had to fight or not, so  it worked out great. It was great to get down there and get some high level training done.

Q – What’s your training schedule like leading up to the fight?

A – It’s been pretty intense. We’re gonna keep it up, until we head up to Montreal on Tuesday. The last week isn’t as tough, but I’ve been getting a great sweat going everyday and going over some game plan stuff.

Q – What’s different about your diet going into a fight?

A – You still gotta eat. You can’t really cut out everything,  but you do have to cut out some of the junk to make weight, but you feel better when you eat clean. You gotta keep the protein high, and get some quality carbs and cut out a few things that I normally like to eat.

Q – What’s your walking around weight?

Q – Do you do any weight training at all?

A – Oh yeah, that’s part of the game. I lift weights usually three times a week and do a lot of strength and conditioning stuff like sprints.

Q – Do you think there’s any area’s of Almeida’s game that you’ll be able to exploit?

A – There’s certain things that I hope to be able to exploit in the fight, but things don’t always work out the way you plan, but I’ve done everything to prepare for the fight and the best TJ will show up.

Q – What would you say the best part of your game is?

A – I think the best part of my game is that I’m well-rounded. I feel that I have good skills in all departments. I always want to develop in all those departments, because in MMA you really have to stay up to date with everything and continuously get better.

Q – Is it fair to say that this is the biggest fight of your career?

A – It has to be. He’s a well known fighter. I call every fight in the UFC my biggest fight, because you can’t lose in the UFC consistently or you’ll get your walking papers. Every time you go out there you are fighting for your job. I gotta go out there and prove that I belong.

Q – What did you think of Almeida’s fight with Hughes.

A – Well, he got caught. A bit of a rough way for a jiu-jitsu guy getting submitted by pretty much a headlock, but that’s what Hughes brings, he’s super strong. I’m sure he’s gonna come out hungry after that loss, because you don’t want to lose two in a row in the UFC, but I’m hungry too.

Q – Do you think you have a home field advantage because the fights in Canada?

A – Yes. He’s probably more well known than I am, but they’re gonna cheer for the Canadian boy. That’s what I expect. I always try to put on a great show when I fight in Montreal and I love to fight there. I feel so comfortable and at home there. Fight week is the best part of training camp, getting to walk around the city and enjoy yourself a bit.

A – If I had the choice I’d definitely choose Montreal. I’ve only been to Vegas once, but it was the hottest week I ever endured in my life. I’d rather fight in Montreal any day of the week.

Q – You’ve been fighting in the UFC since April, 2009. How have you evolved as a fighter since then?

A – I feel that I’ve gotten better in all aspects of the fight game. Mentally, I’ve learned how to better compete inside the Octagon. I always bring the approach to try to finish the fight, but you do have to keep it in mind that you are trying to win rounds and that is very important because you never want to give up a round in a fight. I feel that I’m now prepared to fight anyone in the world.

Q – Where do you see yourself in the Welterweight division?

A – I haven’t got on the TV yet and to me, that’s the goal right now. I want to put on a show and have all the fans recognize me. I want to move up, and I want to be televised, because that’s where the big fight are.

Q – How has your life changed since being with the UFC?

A – It’s totally changed. In the last year I was able to buy a house and a buy a car, stuff that’s tough to do when you’re first coming up in the sport. I’m able to make a better living and I’m fortunate to be here.

Q – What’s the worst part of fighting for a living?

A – Losing. If you lose and get cut from the UFC, then you gotta go fight somewhere for less money. That’s the way a lot of fighters see it. You’re really only as good as your last fight, but I get to do what I love every day, and there’s really not too many bad things about it.

Q – What are your thoughts on the fight between GSP and Koscheck?

A – It’s hard to go out there and make a prediction, especially for Koscheck, because he did lose the first fight, but I do think it’ll be a different fight from the first time. I think Koscheck might be a little more prepared this time; not saying that he wasn’t prepared the first time, but he may have been a little surprised by Georges’ wrestling and approach. It might be one of those fights where neither guy can take the other down, and could take place in a lot of different places. It’s really a tough fight for me to call, but if you gotta choose someone, I guess it’s gotta be Georges.

Q – Koscheck has been talking a lot of trash leading up to the fight. What role do you think trash talk plays in the sport?

A – The thing is, a guy like Josh can talk all the trash he wants, because he goes out there and backs it up. A guy like that, you gotta respect him. But, there’s other guys who talk themselves into positions where maybe they wouldn’t have gotten to had it just been their fighting ability alone. I take a more quiet approach. The goal is to just go out there and fight, and I want people to know my name because I put on exciting fights, not because I talk trash. I guess that’s a Canadian approach.

Q – There’s been a lot of controversies and complaints with judging in the sport. Do you think that there’s anything that can be done about it, or do we just have to deal with it?

A – I think there’s things that can be done. A lot of the judges in place right now come from boxing backgrounds, and even some referee’s don’t know enough about the sport and judge it on certain criteria that maybe you’d judge a boxing fight. I’ve seen some bad judging, especially the Machida-Shogun fight which was definitely the worst fight that I’ve ever seen judged in my life. It’s one thing if it’s a three round fight, but I thought Shogun won five rounds to none, or at minimum four rounds to one, so I don’t know where they got three to two for Machida. I think eventually it will change though, because the sport is growing.

Q – I know this doesn’t necessarily affect you, but what do you think of the merger with the WEC?

A – It’s awesome. I’ve been thinking they should do it for awhile. They’re amazing fighters. A lot of people might not know who they are because they’re in the WEC, but since it’s owned by the same company as the UFC, why not make it the same name? There’s no point in having two different brands. I think it just gives a lot more opportunities to the lighter weight classes; they’ll win a lot of fight of the night bonuses and make more money. It’s good for the sport and it’s exciting.

Q – How do you feel about the state of MMA in the Maritimes?

A – It’s definitely growing with quality gym’s training MMA fighters. I would like to see a few more cards, nothing too big, just somewhere for the promoters to make a buck and for the fighters to get experience. You gotta get these local guys more experience, and the fans out here want to see the local guys fight. When people do come to the Maritimes, they put on too big of a show and they don’t come back or they can’t put on any more shows because they’ve spent too much money. Hopefully someone can come along and put on the right type of shows because all these new fighters need a place to fight. All over the Martimes really needs to step up.

Q – Where do you see yourself a year from now?

A – I see myself knocking on the door, I want to be in the top ten. I want to get a few more fights in, and I want my name to be known.

Q – Do you have a prediction for your fight?

A – No predictions, except for it’s going to be a good fight. That’s all I can say. I’m gonna do my best and put him in a fight as soon as the bell goes.

Q –I know a lot of guys in the sport don’t like to look too far into the future, especially with a fight on the horizon, but what would you say is your dream fight?

A – My dream fight… (laughs) I’ll give you the answer I give everybody, Ricardo Almeida. That’s it, I gotta win before I call anyone out. I’ve got a job to do.

Joe Osborne is a sports and entertainment enthusiast who resides in Halifax, NS. To read more articles like this, visit WhatUpSports.com, or you can contact Joe at osbornejt@hotmail.com.