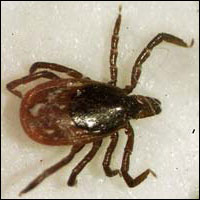 Donna Lugar, a long-time resident of Bedford, is trying to raise public awareness of blacklegged ticks and Lyme disease:

As I hope everyone is aware, in Nova Scotia, blacklegged tick populations are known in the Lunenburg, Bedford and Shelburne areas.

As you may not be aware, many other areas in Nova Scotia have had diagnosed cases of Lyme disease.

Some of these people were out in their backyard mowing the grass. They found a tick and/or saw the telltale bullseye rash and were knowledgeable enough to go to their doctor. They were the “lucky” ones.

Many people, however, never see the tick or the telltale bullseye rash. Then it becomes much more difficult to diagnose Lyme disease.

The following are a few excerpts from the Public Health Agency of Canada website (www.phac-aspc.gc.ca) which I think everyone should be made aware.

“Lyme disease is an illness caused by the bacterium Borrelia burgdorferi, which can be spread through the bite of certain types of ticks.”

“While there is a higher risk of coming in contact with infected blacklegged ticks in areas where populations are established, there is also a low risk of Lyme disease being contracted almost anywhere in Canada because migratory birds transport infected ticks over large geographic distances.”

“The diagnosis of Lyme disease should be made after evaluating a patient’s symptoms and the risk of exposure to infected ticks. Blood tests may also be used to detect the presence of antibodies to the bacteria.”

“When someone shows symptoms of Lyme disease and might have been exposed to the ticks that carry it, guidelines recommend that physicians treat the illness, even if it has not been confirmed with laboratory testing.”

As a potential sufferer of Lyme disease, I find the last three statements interesting in that it has been brought to my attention that most doctors – including my own – rely on the blood tests rather than a patient’s symptoms. However, the blood tests have been known to have false positives and false negatives. In my case, my doctor advised that since my ELISA test (first test given) was negative, I should now go to the U.S. for additional testing.

As there is a huge amount of information out in cyberspace due diligence is required as not all of it is accurate. However, please take control of yourself! It is well documented that many people have been misdiagnosed with illnesses such as MS, ALS, Chronic Fatigue Syndrome, Fibromyalgia, etc. Or, in some cases, Lyme disease can cause an illness which will be cured by the treatment of the Lyme.

Please also make yourself aware of how to avoid a tick bite, how to check for ticks and how to properly remove them. This also applies to your pets!

The Bedford Residents Association, in conjunction with our MLA, Kelly Regan, is pleased to announce that Dr. Ernie Murakami of the Dr. E. Murakami Centre for Lyme disease in Hope, B.C. will be in Bedford on Monday, Sept. 19th from 7 to 9 p.m. in the Basinview Dr. Community School cafeteria. All those interested in learning more about Lyme disease are welcome to attend.