Bluenose Marathon
I ran my first full marathon yesterday. I’ve ran several 1/2 marathons in the past but decided to take the plunge this year and “go the distance.” If you are considering running a 1/2 or full marathon in the future, I highly recommend the Blue Nose right here in Halifax. The 1/2 marathon takes you through the north and south end and even through point pleasant park. The full marathon then stretches out to Dartmouth, where you run along some excellent trails in beautiful woods that border on very picturesque lakes. I never knew that Dartmouth was that pretty!
I was hoping to finish under 3 hours and 50 minutes and I came in at 3:46 so I’m very pleased. I plan on running the Johnny Miles Classic next month in New Glasgow and hope to improve my time. The last hour of the Bluenose was brutal. My whole lower body completely broke down and my range of motion seemed to be about 5 cm. My cardio fitness however felt really solid. Crossing that finish line is quite the feeling. 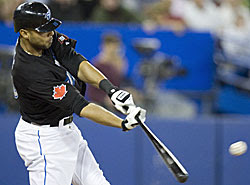 Blue Jays Still Hot
Nice little treat today as the Blue Jays played a Victoria Day matinee vs the Chicago White Sox. The American League East leaders beat the Sox 3-2 and now head to Boston for a pretty intriguing 3 game set with the second place Red Sox. If the Jays manage to take 2 out of 3 at Fenway it would go a long way in establishing some legitimacy to a team that alot of people keep waiting to come back to earth. At the moment, the Jays are the best offensive team in baseball, and they are second in hitting and pitching. We’re 7 weeks into the season so this Jays team may just be for real. But we’ll know much more come thursday night when they finish their series with the Red Sox.
It should also be noted that the Yankees and Rays are winning on a consistent basis now as well, and beginning to keep pace with the Jays and Sox. It’s going to be a very interesting season in the AL east, made more so by the efforts of a Jays team that seems to be getting more of a swagger each passing day. 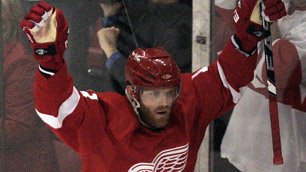 I was fast asleep yesterday after the marathon but I did catch a little of the third period in game 1 between the Chicago Blackhawks and the Detroit Red Wings. Looks like this series is going to have a pace that could rival the Pens and Caps last week. Lots of speed and skill on display. Ryan Delong, a Toronto Maple Leafs fan, was telling me he likes Chicago to win that series. I can’t see that happening. Mind you, Ryan did pick Carolina to beat Jersey and Boston. Detroit has so much balance throughout the roster. If they keep that Blackhawks team together, they’ll play for a Stanley Cup some day, just not this year…although a Pittsburgh/Chicago final would be alot of fun!

The Brett Favre saga continues. Favre is talking to a doctor about taking a look at his right shoulder. If they are able to get that old gun read to fire again, expect to see Brett Favre playing for the Vikings this season…….Tony Kornheiser has dropped out of Monday Night Football. Kornheiser has a notorious fear of flying, and said that after looking at the MNF schedule for this season, he decided he better walk away. That’s unbelievable to me. I’m sure Tony could afford an excellent psychiatrist to help with his fear of flying. How many sports journalists would kill to be in the booth for Monday Night Football? John Gruden, the former Raider and Bucs Head Coach, has been chosen to replace Kornheiser……I’ve been reading the new book on Alex Rodriguez. It’s not bad. Not great by any means. It talks at great length about his steroid usage and pitch tipping scheme he had while with the Texas Rangers. But the author also seems to take pleasure in pointing out Arod’s personality flaws, whether it be insecurity, selfishness, or ego. If any thing, the book sort of makes Arod come off as being alot more human then we ever thought he was, a guy who has alot of faults just like we all do. Certainly he has made some mistakes, but I get the feeling this book may draw people closer to Arod, and I don’t believe that was the author’s purpose in writing the book…….Orlando handled Boston pretty easily last night, pulling away in the 4th quarter. That’s a series that Orlando should have won in 6 at the most. I think Cleveland will beat them in 5 games…..Can Denver play with the Lakers? Well if a Houston team that lost Yao Ming in game 3 and took LA to 7 games with the likes of Carl Landry, Luis Scola, and Aaron Brooks can play with them, than certainly the Nuggets can. I still like the Lakers in 6 or 7.