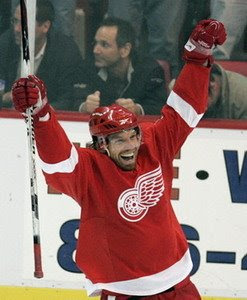 Red Wings Strike Again
A couple weeks back on the first episode of haligonia sports, Chris Trembley said that hockey is a game of mistakes, and how effectively teams capitalize on them. Well, no other team in the NHL pounces on a mistake and makes thier opponents pay the ultimate price, like the Detroit Red Wings. There was no greater example than tonight, when Brian Campbell of the Blackhawks lost control of the puck in the Red Wings zone, and 3 Detroit players skated the other way with only one defenceman desperate to catch up for the Hawks. Two passes later, and tic tac toe the game was over, Detroit had one in overtime to beat Chicago and take a 2 games to none lead in the Western Conference final.
At one point Gord Millar compared the series to the Islanders/Oilers classics back in the eighties. The year before Gretzky’s group won thier first Stanley Cup, Mike Bossy and the boys gave the Oil a stern lesson in how to go about winning a championship. The Oilers would easily sweep the aging Islanders the next season, signaling a passing of the torch from one dynasty to another.
Are the Blackhawks and Red Wings similar. I don’t think so. Detroit is not that old, and assuming they sign another top free agent, which they usually do, whose to say they won’t be back in the Stanley Cup finals next year. Whose to say Chicago will ever get past the Red Wings, assuming they don’t do it this year. This Detroit team is very, very special, and I would not be surprised to see them win, or be in the Stanley Cup finals, for the next 5 years.
Areza Stole the Ball!
It may not have the same ring to it as “Havlichek stole the ball”, but Trevor Areza did come up with a huge inbounds theft to seal the victory for the Lakers tonight in game 1 of the Western Conference final vs Denver. Kobe Bryant chipped in a very business like 40 points, while Pau Gasol had some big tip ins and foul shots down the stretch to help the Lakers win by a couple. The Nuggets played really well and nearly took control in the 4th quarter, but Kobe the closer exerted his influence on the 4th quarter and made the game his own, the key basket coming from Derek Fisher, a three pointer from the corner after Kobe drew the defence and kicked to the open Fisher.

Switching to an NBA playoff game after watching an NHL playoff game can often be pretty dissapointing. NBA players simply do not play as hard or intense as hockey players in the midst of a stanley cup run. They obviously try harder than the regular season, where they simply go through the motions on many nights, but there is still a genuine lack of effort and mental lapses that plague the NBA game……….is there anything is sports more ridiculous than the war of words between Mark Cuban and Kenyon Martin. Below is a piece from hoopshype.com;

” There’s a new Cuban Missile Crisis. It has to do with the shots that continue to be launched between Dallas owner Mark Cuban and Denver forward Kenyon Martin. “He’s a coward,” Martin said Saturday about Cuban, a week after Cuban made an unflattering comment to Martin’s mother during a West semifinal series, with Martin believing Cuban has yet to apology in an appropriate manner. Meanwhile, Cuban admits he “made a mistake” in having apologized to Martin’s mother on his blog and not having yet done so personally in a timely fashion. But Cuban, in an e-mail to HoopsHype.com, wrote he wants Martin to take responsibility for his actions, which he wrote included calling a wife of a Mavericks staff member a “(expletive) fat pig” and making an obscene gesture. It all heated up May 9 after Game 3. After the Nuggets won a controversial game in Dallas, when the NBA later admitted a foul should have been called on Mavericks guard Antoine Wright and a game-winning three-pointer from Denver forward Carmelo Anthony wiped out, Cuban was incensed. He passed by Martin’s mother, Lydia Moore, and has admitted saying “that includes your son” when a fan called Nuggets players thugs.”

So basically you’ve got a jerk billionaire squaring off against a jerk millionaire. Both Cuban and Martin have shown little or no class throughout thier careers as owner and player respectively.
It’s stories like this that make you realize you have to watch alot of professional sports with one hand squeezing your nose……..No NHL on Wed. night, the next game is Thurday night’s game 2 between Carolina and Pittsburgh. Tomorrow night the Cavaliers and Magic get started. It seems like the Cavs haven’t played in a month, will they have some rust from too much rest? I doubt it.