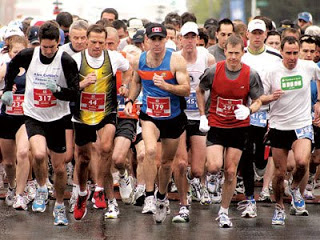 The BlueNose Marathon Runs Sunday at 9:00

Article by Joel MacDougall
Prior to last week, it had been a long time since I had seriously run.

My father is an avid runner and I remember doing the kids’ “Fun Run” at some of the local circuit races he attended and even doing a 10k with him for charity.

As I got a bit older, I tried out for the track team, more for the day off of school than anything else. The “goal” of running was not always apparent to me, aside from getting from one place to another.

I have typically preferred to get my physical activity through competitive team sport like hockey, basketball, volleyball, softball, etc., etc.

Recently I began running again and it felt so good that I have registered to do the 5 km run during the Scotiabank Bluenose Marathon this weekend.Often one to make a claim that I will do something and then not follow through, I figured signing up for an actual race, would be the push I needed to get myself going.

I have noticed improvements in my own ability after only a couple of times out. The first run I took, I was happy to complete it in a relatively decent time, but I would have been satisfied with any time really. My next outing was a bit of a disappointment compared to the first. I had not properly stretched following the first run, and I was quite stiff for the next few days, and that led to a slower time. Lesson learned though. My most recent outing came after several attempt to get out were thwarted by various distractions, but my body felt good, and I felt I could have pushed myself a bit harder.

I am starting small with the 5k, but I hope to get up to a 10k in the near future and then start trying to improve my times. Since I have put in only minimal training so far, completion is my only goal for Sunday. Okay that’s not entirely true; I’d like to crack the 30 minute mark, but my point is that I won’t be disappointed if it takes me longer.

I still like to participate in competitive sports, I have found that taking 30 minutes to an hour on my own for a run offers the flexibility to go when I want or can. It has also provided me an opportunity to step away from stresses of work and day-to-day tasks and focus solely one putting one foot in front of the other.

One final note about my run on Sunday is that I am accepting donations to the Heart & Stroke Foundation of Nova Scotia. Heart disease and stroke are leading causes of death in Canada and the more we do to understand them the fewer friends and family we will have to lose. Please visit my page on the Scotiabank Charity Challenge to show your support.

I’ll let you know how I did or you can follow @JMDougall on Twitter to get immediate results.

Joel MacDougall lives in Halifax and writes about all sports, both local and abroad. His website can be found at http://route19.wordpress.com/.