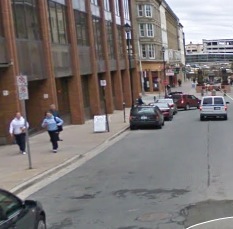 Two men were arrested after a break and enter in Bedford while the homeowners were present, and a man suffers serious injuries after a daytime assault downtown.

At 8:15 p.m., The Halifax Regional Police responded to a Douglas Drive address for a break and enter where the homeowners were in the house.  Two males entered the home looking for items.  A female from within the home, called 911.  Members arrived moments later, and observed two males leaving the building.  Officers along with a K-9 unit searched the area and located the two suspects in the neighbouring back yards.  Both were taken into custody without incident.  The items stolen were also recovered.   The two males in their 20’s will be held in custody and will be appearing in court on Monday facing charges of Break and Enter, Robbery and weapons charges.

At 5:00 p.m. the Halifax Regional Police responded to the 1800 block of Granville Street for an assault.  Members found a twenty year old male that had been assaulted suffering from a head injury.  A short distance away, a 19 year old male was arrested without incident.  The victim is in the QEII with serious injuries.