Spoiler alert, obviously. If you’ve seen the third-last episode of Breaking Bad (and if you like the show and have the Internet, my god I hope you have) then click through so we can talk about it. 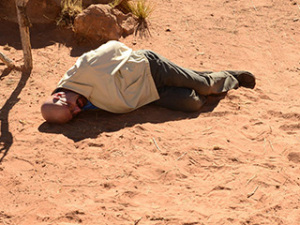 Let’s start at the beginning, shall we? Not only was that flashback to Walt’s first foray into cooking meth powerful, but it was artfully done. For a moment, I wondered if it had been filmed in advance, years ago.

Now, that scene in the desert. Every single second of it, I felt like holding my breath. Last week, we all knew there was no way Hank and Gomez could get out of this situation alive. And when we cut back to that scene, Gomez was dead and Hank was badly wounded and seriously outnumbered.

Even in his last moments, Hank had a lot more class than Walt. Walt stupidly begged the Nazis to spare Hank, telling them that he was family as though it would matter and then, so stupidly, revealing that they were standing on top of 80 million dollars.

How could Walt have thought that would work? Of course they would still kill Hank. And Hank knew it. “You’re the smartest person I’ve ever met. But you’re still too stupid to know that they made up their minds ten minutes ago.” Hank was killed, but he went out with pride. And he was buried in the grave that had held Walt’s money.

Bryan Cranston, of course, was phenomenal. When he fell to the ground in anguish after Hank was shot, it really set up the course of action of the rest of the episode. Trying to buy Hank’s life was Walt’s last little bit of humanity, the last sign that he still cared about his family. Not only did his brother-in-law die, but he lost much of his money. He was thrown a barrel (11 million our of 80) out of pity, because Todd admires him. How humiliating.

Everything Walt did after that was pure evil. He revealed Jesse’s location, and confessed to watching Jane die just to hurt him as much as possible. But the episode got even crazier.

I thought the scene earlier in the season when Marie tried to take the kids away from Skyler was powerful. But it had nothing on their interactions in this episode. Kudos RJ Mitte for holding his own in the scenes this week, too. Watching Walt Jr. learn the truth about his father was heartbreaking. I imagine he’ll insist on going by “Flynn” from now on.

The most horrifying scene was the fight back at the house, when Walt finally acted like the monster he is in front of his family. Whatever humanity he had left was buried in that grave with Hank’s body. Skyler had to pull a knife on him to threaten him to leave them alone, Walt attacked her in front of their son, and poor Walt Jr. had to come to his mother’s defense. And then, in a moment that made my fiance and I gasp out loud, Walt grabbed baby Holly before he left. It was like a pathetic, desperate attempt to hold on to the last bit of his family that didn’t yet despise him.

I didn’t think of this on my own, I think I was still too caught up in Walt abducting Holly to put it together – but when Walt called Skyler and bullied her on the phone, he was trying to save her. He knew with him gone, his crimes would be pinned on her. So that phone call was meant to help her case, to paint him as the abusive husband (which, he is, but Skyler isn’t entirely blameless) that manipulated and bullied her into going along with his crimes. All I could focus on in that scene was how Skyler kept deferring to him, but I assumed it was because she wanted her baby back. Walt did leave Holly at a fire station in the end.