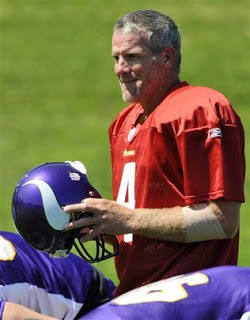 Favre the Viking
It would seem that getting clobbered by a Miami Dolphins defender while taking a lateral pass during a hopeless play while wearing a New York Jets uniform will not be our last memory of Brett Favre.
Today the future Hall of Famer, 3 time NFL MVP, and Super Bowl champion signed a 1 year contract worth over 10 million dollars to play for Green Bay’s chief rival, the Minnesota Vikings (although Chicago Bears fans would claim they are the Packer’s biggest rivals).
The legendary Packer will be the Viking’s #1 Quarterback in a move that seemingly only makes sense to the Vikings and Brett Favre.
Favre is obsessed with getting revenge on Green Bay for not bringing him back to the team last year after he decided to nix his retirement plans. The Packers were ready to move forward and install the young and talented Aaron Rodgers as their quarterback of the future and decided to trade Favre to the Jets, once Favre finally gave his approval.
Favre went on to have a topsy turvy season with the Jets, culminating with a late season swoon that saw the Jets miss the playoffs. Several of Favre’s teammates openly criticized him to the media, citing selfish behaviour and claiming that Favre never made an effort to connect with his Jet’s teammates.
Favre has been very honest about his desire to play Green Bay twice a year in order to gain some measure of revenge on the franchise that he quarterbacked 16 seasons for, took to the playoffs almost every season, and led to a super bowl championship in 1996. Favre is the most popular player in franchise history, and the Packers #4 jersey was one of highest selling NFL products ever.
As for Minnesota, it gives them a significant upgrade at QB on Sage Rosenfals and Tavarius Jackson. However, Favre is nearly 40 years old and has had significant shoulder problems in the past couple of years. Favre and Minnesota Head Coach Brad Childress to have a history together, and Favre should be able to learn the Vikings system in a hurry.
The key for Childress will be to keep Favre under control. Favre does not have the arm strength he once had but still tries to force passes to receivers that are often turned into game changing interceptions. The best season Favre has had in the past several years was two seasons ago when he stuck to Green Bay Head Coach Mike Mccarthy’s playbook and didn’t take too many chances. Whether or not Childress will be able to get Favre to stick to his game plan remains to be seen, but Favre has a great deal of respect for Childress so that bodes well for his chances.
There has been a lot of speculation about how this will affect Favre’s legacy. The history of legendary NFL quarterbacks finishing out their careers with other teams after their skills had seriously diminished would show that it holds little bearing on how we remember them. Joe Montana finished his career with the Kansas City Chiefs, yet we remember him as a multiple Super Bowl winning San Francisco 49er. Joe Namath spent his remaining NFL days with the L.A. Rams, but we still call him Broadway Joe and picture him holding up that finger after beating Johnny Unitas’ Baltimore Colts in the 1969 Super Bowl. Speaking of Unitas, he played out his career with the San Diego Chargers. But it’s the image of Unitas in a Colt’s uniform with that classic sixties buzz cut that resonates in our minds.
With that said, none of those quarterbacks played for the biggest rival of their signature teams, let alone tell anybody who would listen how badly they wanted to stick it to them.
This is what separates Favre. A need for revenge on a franchise whose fan base worships the ground he walks on. A future hall of famer, hurt and betrayed by a team that had made plans to move forward after Favre retired, and were unwilling to welcome him back with wide open arms.
Brett Favre is one of those few elite athletes who reaches the point of his career where he can do anything he chooses to do. Sadly, Favre has chosen to pursue a path in which there is no glory. Only a measure of revenge that is fleeting at best, and best left alone.
The Vikings play the Packers on Monday Night Football on October 4.
Jays lost tonight 10-9 to the Red Sox. Casey Janssen booted a bunt attempt in the 8th inning
and then threw the ball past first base into right field to hand the Sox the win….Randy Ruiz is a lot of fun to watch. He was called up to replace Alex Rios last week. He’s already hit three home runs and a couple have been pretty impressive. Will he stick? Well it looks like any breaking pitch away is going to get him on strikes. But Ruiz has been playing in the minors for over a decade with 11 different organizations, so I’ll be cheering for him regardless…..Mindy McCready will reveal all regarding her affair with Roger Clemens for a reality television show that will air in the new year. Has any athlete in the history of sport fallen farther than Clemens? He was arguably the greatest pitcher of his generation. Now he’s mired in scandals involving steroids and adultery. Wow. www.fannation.com/truth_and_rumors/view/115232-mccready-to-discuss-clemens-affair-on-tv?eref=sihp