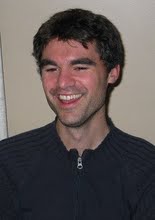 “I kind of wondered, what would happen if instead of going to an airport and immediately being thousands of miles away, just sitting there and let it move around me and see what it looks like from a stationary position,” he says.

With his laptop and a 40” TV monitor provided by airport staff, he’s setting up in the food court of the main terminal and writing a short story that commuters can watch unfold in real time.

He was inspired by a European writer named Alain de Botton, who spent a week writing in a London airport. To Tattrie’s surprise, the Halifax airport staff was enthusiastic about the idea.

But the difference between the two writers is that Tattrie is inviting people to approach him and share their stories.

“A lot of people are grumpy at the airport but they’re actually kind of excited underneath, if you can get away from the torture devices of security today and get into where they’re going.”

He’s tight-lipped about the details of the plot, but he says it’s loose enough that it will allow him to incorporate real stories from people passing through into the story.

“I don’t want to be too pre-planny about it. I think once I get there and things start happening it’ll become more clear to me how it’s going to go.”

“I’m hoping they can find a bed for me somewhere,” he says. “But if not, it won’t be the first time I’ve slept in an airport.”

He spent seven years travelling in Europe working as a journalist. Last year he went to Cairo, Egypt, which was about 30 hours of transit time.

“It’s kind of to re-create that journey inside, rather than fly across the planet.”

The finished story will be around 1500 words and appear on both Tattrie’s and the airport’s websites.

Bringing Talent to the Terminals
https://haligonia.ca/bringing-talent-to-the-terminals-9553/