Ever since I moved back to Halifax I’ve noticed that we don’t have many brunch specialty restaurants. We excel in greasy diners, and we have pubs and trendy restos that serve brunch, but the amount of spots dedicated to this meal are few and far between.

Jane’s on the Common was known for its brunch, but alas, it bowed out from the culinary map before I could try it.

Recently, the old Jane’s location has been transformed into Robie St. Station, a new restaurant specializing in brunch! How appropriate!

I withheld dining at Robie St. Station until they had been open for a while. Some of the early Yelp reviews had grievances about portion sizes and lacklustre toast. Finally I was prompted to visit, due to requested content for a newsletter I write.

I arrived in the middle of a weekday afternoon, so the restaurant was virtually empty. The space was brighter and funkier than Jane’s – perfect brunch decor in my opinion. 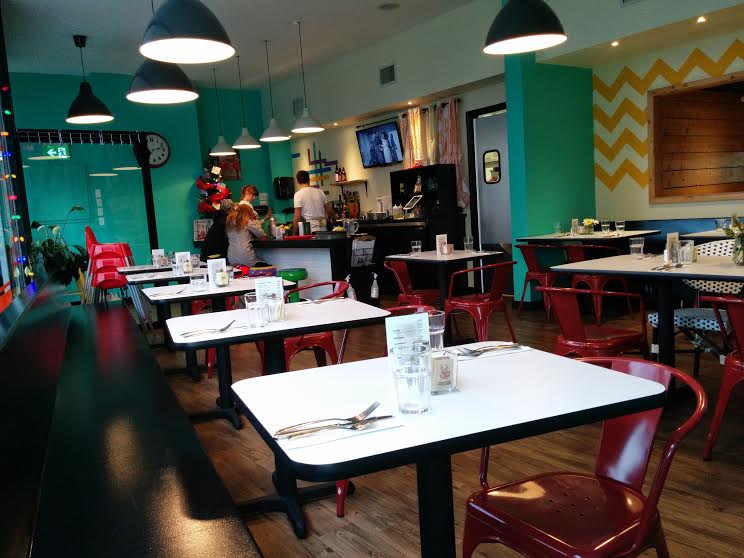 My waitress was super patient and friendly, as I drilled her on the menu. She brought me some coffee that was truly amazing; Java Blend beans ground and brewed by the cup.

I ordered the cilbur ($12), which is a take on a traditional Turkish dish. Basically it was two poached eggs hanging out in some delicious garlic yogurt and drizzled with  chimichurri and chili butter with naan bread for transportation. 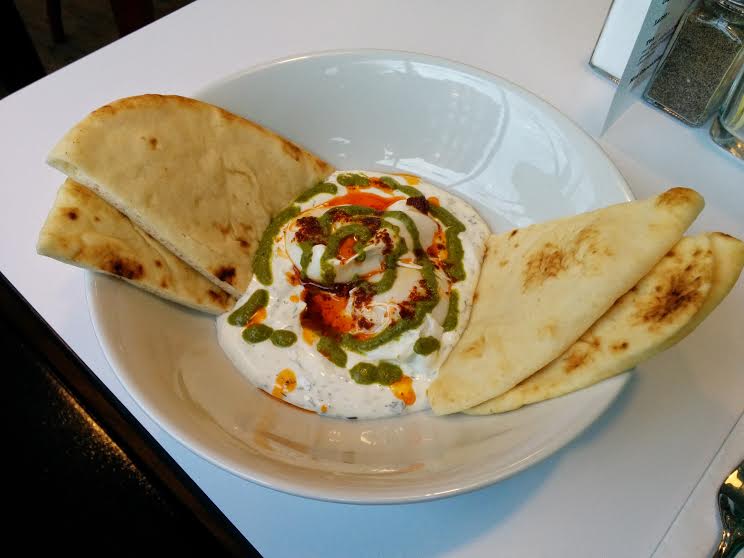 There were some really good flavours at play here. My only reservation is that the cold yogurt cools down the eggs, and I’m kind of weird about my eggs and their temperature.  Some of the online reviews I’ve read indicate this dish was originally served with plain old toast. If that’s the case, then it is already clear that Robie St. Station has been making improvements and listening to feedback.

I also couldn’t help but order a banh mi, since I’ve been on a bit of a banh mi quest in Halifax for quite some time. There is a choice of pork belly, chicken, tofu or fish. For $8 with hand-cut fries (or salad), this is a great deal. 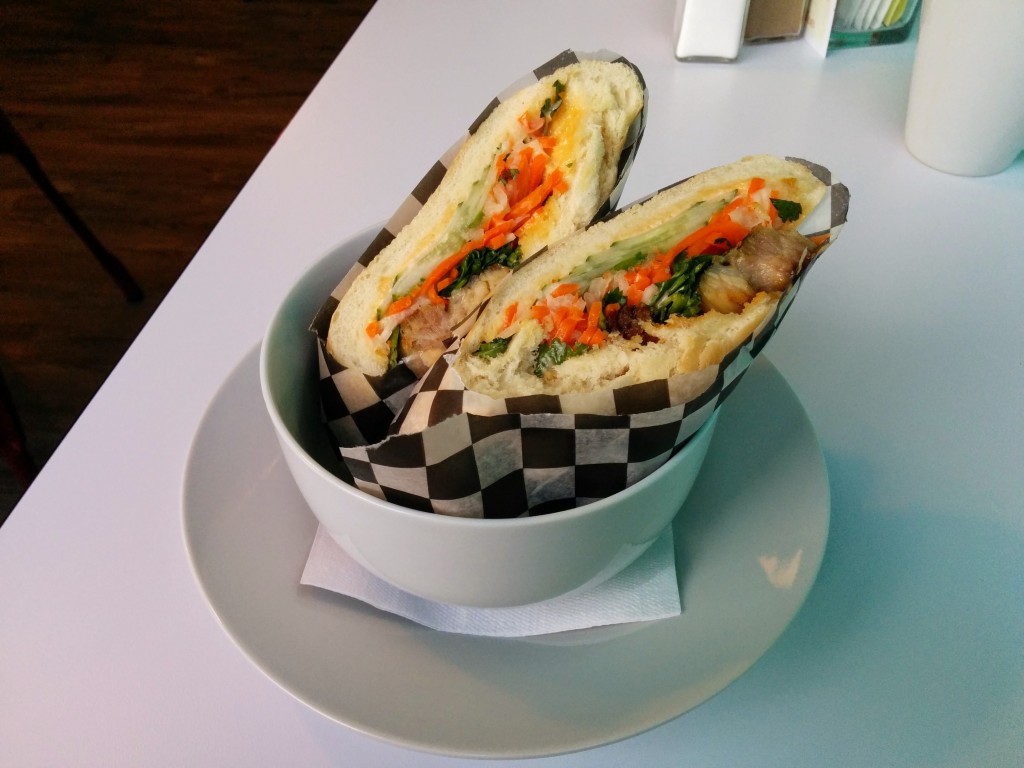 This is not the best banh mi I’ve ever had. For that, I’d have to fly out to a city where Vietnamese sandwich shops grace the streets with their hand-held delights. I’m looking at you, Calgary.

The bread was too soft to resemble a real Vietnamese baguette, but the pork belly was seriously awesome and flavours abounded.

I knew I’d have to return to Robie St. Station before I felt comfortable writing a review, and 2 days later I was conveniently invited out to brunch by my friend Megan.

She ordered the rösti I have heard so much about – a potato pancake topped with smoked salmon, sour cream and dill. You have the option to add an egg, but the menu does name a price. Considering the dish starts out at $13, this seems a little steep to me. Looks good, though. 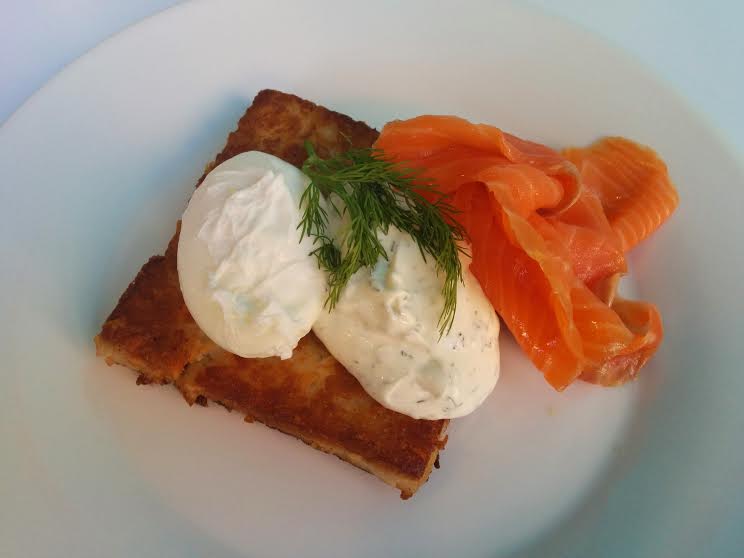 I ordered “The Remedy” ($11), which is the standard breakfast option. It includes “2 eggs, any style, belly, bacon, pulled pork or fruit, taters n’ toast”. The menu says “toast” in several places, but this always ends up being not-toast. In this case, it was a lovely biscuit. I’m not sure if “toast” is just being used as a generic term for “some sort of bread”, or if it is a remnant of the early days.

I  ordered all 3 breakfast meats because I’m crazy thorough and maybe just a little crazy. 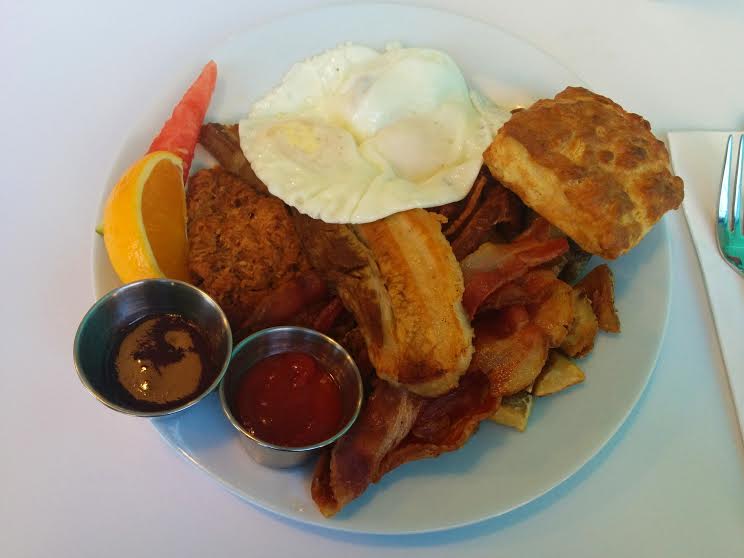 The plate came with ketchup, butter, and what appeared to be home-made jam. While I did get a little orange wedge and watermelon slice, I would have liked more fruit to cut through the grease. Fruit is available as an alternative to meat, and the vegetarian at our table took advantage of this. It was a little bowl of honeydew, cantalouope, and grapes.

The hashbrowns and bacon were up to snuff, and my eggs were cooked a perfect over-easy (which is really the only way to order eggs). The pork belly, which I had enjoyed so much in my banh mi, was almost too rich and fatty for my morning taste buds. But it’s a really cool alternative to the typical breakfast meats, and I’d probably order it again. The pulled pork was kind of a dense mound of flavour – I would have preferred it less mushy and less salty, but I was relieved that it wasn’t drenched in a too-sweet BBQ sauce. It complimented the eggs and hashbrowns nicely.

This meal was totally satisfying, both at fulfilling my hunger and piquing my interest. It’s probably the best breakfast I’ve had in a LONG time. I washed it down with an old fashioned cherry coke, but I’ve got my eyes on the white chocolate-pistachio milkshake. The Station just got its liquor license, so boozy milkshakes and mimosas are on the agenda.

The lunch options included fish ‘n’ chips, a bibimbap burger, curries and ethnic “bowls”. What was missing was truly decadent brunch fare, like hollandaise drenched bennies, skillets and poutines. But I’m still impressed with the latest brunch effort in our city.  Robie St. Station is a very welcome addition.