We are over-scheduled on weeknights.

Life is hectic enough as two parents who work full-time. Who wants to be running in the door, feeding kids as quickly as you can and then running back out within 45 minutes? Once or twice a week maybe. But four times?

The issue is that the kids seem happy. We never get the “I don’t want to go” complaints and most of the activities they’re in, they’ve asked to be in. The one exception would be Sparks and Brownies. It’s the one thing I put both of the girls in when they turned five because I believe strongly in the program and its positive focus on girls, community and the outdoors.

Last year each of them asked to try something new. Our oldest was interested in taking guitar and our second daughter wanted to take dance (Highland). They both enjoyed their new choices and wanted to continue with them this year.

So what about sports? In past years, our oldest has done summer swim team in the summers and the Martock Ski Race Club in the winters (we spend a lot of time skiing as a family). Both girls will do those this year and they’ve now both expressed an interest in basketball. 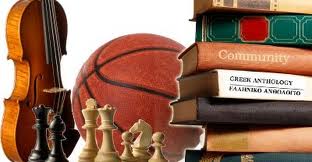 What is becoming increasingly clear to me as they get older is that kids seem to be choosing their sport of choice very early and excelling in them very early. There are A teams and B teams at age eight and summer sports have robust winter programs and vice versa. It blows my mind to think about the competition that will happen for junior high sports teams. Unlike when many of us were little, it seems like if you haven’t played the sport before you hit junior high then you’d be out of luck for making a team. I could be wrong but that’s what it feels like as a parent.

That’s why when basketball came up, particularly for our oldest, I was a little torn. I knew it would add another practice and game to our already busy schedule and I wasn’t willing to let go of Brownies and guitar because she gets so much from both of those. I also knew how great a team sport would be for her and how well it might set her up for school sports in the future.

She sealed the deal though when we were talking about it. Although her quote isn’t entirely true, I loved her thought process. “Mom, on some TV shows I’ve seen there seems to be a few types of girls in school as you get older. Some of them make more drama than others. I want to be one of the sporty girls because they’re healthy and they seem to create the least amount of drama.”

So we now have basketball practice once a week on different weeknights for each of the girls which takes us to activities on Monday, Tuesday, Wednesday and Friday. I own it. I did it. I figure I have a little over a year until I really go crazy. That’ll be when our son hits age five and will likely start expressing his own interests. Somebody help me.