I work for an Internet and TV company and I have to admit that as a parent, screens are starting to drive me crazy.
They are everywhere – between our phones, our actual TV, our work laptops and the iPad, the kids are exposed to them all of the time.
It’s not the screens themselves, I guess, but it’s our collective reliance on them that’s starting to bug me.
Our five-year-old wanted to practice her writing this weekend and felt she needs the app on the iPad to do it. Ummm pencil and paper? Our seven-year-old wanted to play checkers with her sister and again, wanted the iPad instead of the board. The first sentence out of our almost-three-year-old’s mouth every single morning is, “Can we go downstairs and watch a show?”
I suddenly find myself on an unexpected mission to go back to basics. Sure it’s cool that you can play games, do puzzles and colour on a computer but why do you really need to? In the past I’ve justified it to myself by saying that they’re learning. Anything we’ve ever downloaded or let them watch on TV (for the most part) has had some sort of learning component to it but now I’m thinking even that isn’t a great excuse. If I were to be honest with myself, what screens really allow me to do is something other than interacting with my kids (ie cleaning, cooking). And because they’re “learning”, I can feel just a little less guilty about it. 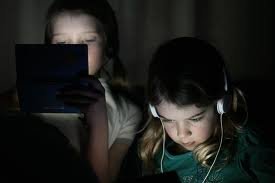 All of these thoughts were running through my head on Saturday as we drove home from Martock. Our oldest joined the race team there this year which means she can ski with the team both Saturday and Sunday mornings. For many, that would seem like overkill. A 45-minute drive, organizing gear, packing lunch on a Saturday morning – just seems like a lot. But now that we have it down to a science – annual passes, all gear in one big hockey bag so it stays together – we are getting better at getting out the door early in the morning. While she skies for three hours with the team, we ski with the other two kids. We left the hill around 1pm on Saturday after a wonderful morning outside and I couldn’t help but think that if we were staying home every weekend this winter, the kids would likely be watching Saturday morning TV for a good chunk of that time.
I’m not hard core – I mean there’s a time and a place for everything. The TV does do some babysitting at times in our house. Our phones and the iPad are great for keeping the kids occupied on trips. But really, no screen can replace real arts and crafts, cuddling on the couch doing flash cards together, being outside and playing board games as a family.
I saw a quote on Facebook recently that sums it up perfectly, “Kids don’t remember their best television day.” Delicious food for thought.
Deanna is a Mom of three, wife, marketer and blogger – lover of travel, morning coffee, family time, belly laughs, good friends and uninterrupted showers! Follow her on twitter @DeannaCMiller