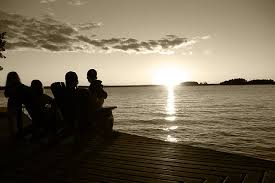 I do my best not to wish away time. Anyone who reads this blog on a regular basis knows how melancholy I get each time our youngest passes a stage that makes him seem more like a little boy (his recent move from crib to bed still weighs on my mind).
Even though I love the baby and toddler years, I must admit that last weekend gave me a glimpse of life as the ‘older’ family we’re becoming. It was my Grandmother’s 90th birthday and we all flew to Toronto to celebrate with my extended family. Admittedly I was a little worried about the flight there – my husband was away on business so I was flying with the three kids alone and he was meeting us the next day.
Despite delays late into the night that led me to re-book our flight for the following morning, flying was a breeze. The girls were happy to sit and watch a show and enjoy a snack. Our two year old was restless, but good. He managed to keep himself busy turning the overhead light on and off, putting the earphones in the jack over and over again and playing “I spy” with me. 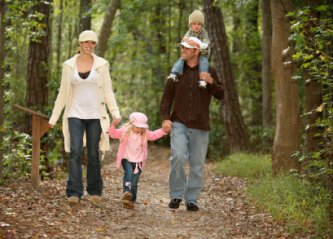 Once we landed, it was a jam-packed weekend of activity and visiting. The five of us were staying in a hotel room with two double beds, it was our first ‘stroller-less’ vacation and naps and early bedtimes were non-existent. Despite all of this, the kids were incredible. We spent a day walking around the Metro Toronto Zoo, we swam, we took the bus to visit my Grandma, we rode the subway, we spent time at the Ontario Science Centre and we hung out at my cousin’s place. On the very last day, after three late nights and a crazy schedule, we had my Grandma’s party and the kids had to socialize with a lot of adults they didn’t know or remember.
I left the weekend feeling incredibly proud of our little unit. The kids were adaptable, excited to try new things and great with new people. In the past, trips had to be more planned – we had to carry more ‘stuff’, we had to work around naps and exhaustion led to major mood changes.
Sure we still had some tantrums and of course we’re still dealing with diapers and a two year old who likes to run off and get into things, but for the most part, there is a bright light shining down on this next stage of our family. Whenever I have expressed my sadness about leaving the baby stage, many people have told me that I’d fall in love with every stage. I must admit, after this wonderful trip, that I finally believe it.
Deanna is a Mom of three, wife, marketer and blogger – lover of travel, morning coffee, family time, belly laughs, good friends and uninterrupted showers! Follow her on twitter @DeannaCMiller

But Mommm: The Light
https://haligonia.ca/but-mommm-the-light-78054/