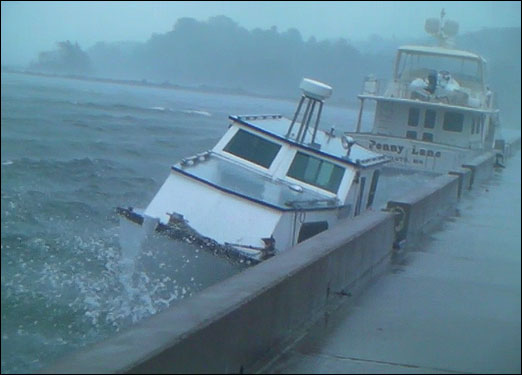 Boats seeking refuge were getting knocked around as Hurricane Bill arrived at the Bedford Waterfront on Sunday morning. By 2pm the worst of the storm was over.

Environment Canada has lifted its Tropical Storm warning, as Hurricane Bill heads towards Cape Breton, where a hurricane watch has been issued for Southern Cape Breton.

Hardcore surfers headed out very early Saturday morning to take advantage of the swells before things got too serious. Now that the storm has passed, many are dreaming of the swells that will make for awesome surfing for the next couple of days.

According to the Canadian Hurricane Centre, “the eye of hurricane Bill became evident on conventional radar imagery from gore Nova Scotia early this afternoon and at its closest approach was 75 kilometres south of the Halifax Regional Municipality”.

By early evening most stores around Bedford had reopened, and business went on as usual.

It was remarkable that a storm that “promised” to bring extensive rain and extreme wind caused so little damage, with few Bedford residents losing power.

For flight information visit www.hiaa.ca. Many flights are now coming in and out of Halifax Stanfield International Airport, but there are still delays and cancellations.