According to the Great American Camping Cookbook by Scott Cookman, Henry David Thoreau was happy with “a piece of ship’s bread in one hand and a piece of fried pork in the other.” This he ate at every meal while camping, supplemented by an average of four cups of coffee a day, five spoonfuls of sugar each. Earnest Hemingway had more to his camp diet, although it sounds strange and unappetising; a breakfast of lard-fried flapjacks, a lunch of raw onion sandwiches dipped in a stream, and a dinner of pork and beans and canned spaghetti boiled in a skillet, doused in ketchup, and sopped up with half a loaf of bread. Bleah!

If you love the outdoors, there is no reason why a meal must be artery-clogging or the bare minimum of nutrition. Take Cookman’s book. He references hundreds of years of cookery, culminating in the cuisine of the American pioneer. Part history book and part cookbook, this guide is full of fascinating tidbits, like the history of the chuck wagon, and how to brew traditional camp coffee. There’s even a chapter dedicated to the role of liquor in the old west. Did you know the U.S. Army encouraged ever wagon in the train to carry around 10 gallons of whiskey?

Does traditional cooking hold some romance for you? A.D. Livingston’s Skillet Cooking for Camp and Kitchen may be of interest. This isn’t a cookbook for frying pans and woks. This is cuisine from a rusty, cast-iron, well-loved and deeply-flavourful skillet. He quickly dispels illusions of pristine pans. This description does sound gross, but the skillet is capable of so much, not just frying steaks. He offers recipes for beef and bird, of course, but check out some of these curiosities. Under game animals, try Skillet Squirrel with Dried Morels, and under exotic meats try Turtle Stew with Acorn Gravy. Not appetising? Vegetarians might like Turkish Eggplant or classic Fried Green Tomato Sandwiches. And there are over a dozen recipes for skillet breads!

For more culinary variety, take a skim through The Scout’s Outdoor Cookbook by Christine and Tim Conners. They’ve gathered hundreds of recipes from Scouts and Girl Guides, and organized them by the meal. With each they list the cooking method (such as Dutch Oven, Pie Iron, or no cooking at all), difficulty rating, and cite the recipe‘s source (usually not the leaders, but the kids themselves!). Many of these meals are great for kids to make…take a look at the Gorp recipes, or the bizarre S’MACOs (half s’more, half taco!).

The One Pan Gourmet by Don Jacobson takes a different tact, by acknowledging the variety of cooking methods but encouraging minimalist cooking. The meals themselves aren’t reduced (like Bangkok Beef and Peppers or Honey Curry Chicken), just the time and materials invested in the meals. To further encourage a small kitchen kit, he makes numerous suggestions for substitutions, like protein alternatives for lighter packs and fuller bellies. He even offers ‘lite’ alternatives, though I agree with his statement under A Philosophy of Eating: diet at home…eat on the trail! 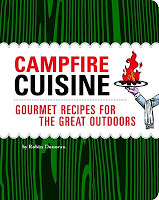 For a modern look at camp food, Robin Donovan’s Campfire Cuisine is an enjoyable read. This book is full of savvy tips; safe food handling (how does one transport raw chicken and veggies in the same cooler?), safe cooking (when is a pork chop cooked properly), and storage times of perishables are ideas strangely missing from other guides. The meals themselves are often of a higher calibre than those in previous titles, such as Halibut with Fennel and Olives, Grilled Tofu with Coconut Curry Sauce. So if squirrel and s’macos aren’t your thing, skip straight to this gourmet guide.