How has your Canada Day been going, ladies? Mine was fine, but quite long. I’m exhausted. But I miss blogging, so I gotta get on here writing a few words 🙂

I’m still at the conference, and got bored for sitting in the conference room all day. The food was fabulous though, I didn’t have a single thing to complain. I normally have a bit of oatmeal or cereal, an omlette, some juice and fruits in the morning. Love those blueberries that they put out, I could basically just eat blueberries all day and be just fine. Lunch is a lot harder to control though, so many choices. Today they had watermelon & mint soup, Canadian bacon & cheese panini, turkey with stuffing and smashed potato, veggie curry, corn bread, lots of cut up veggies, 3 kinds of salad, and 3 big trays of fruits. Desserts were Canada Flag strawberry shortcake and berry cheesecake. Trust me, I tried to eat more veggies and fruits to make up for the fatty desserts I had, as it was way too hard to skip desserts all together. The snacks were addictive too. I’m not doing very well, haha…

Last night we went on the ferry to get to a restaurant on Wolf island, across the lake from downtown Kingston. I kinda had my expectation up, as people kept talking about the place. The ferry ride was about 30 minutes. It was busy at the time, as the car platform was full (approx. 50 cars were there). We were sitting on the upper floor, and it was still sunny out, so the ride was nice. Did I say it was free? 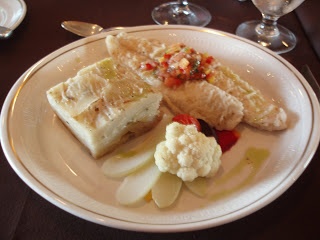 The restaurant was ok, nothing spectacular. They had a guy playing piano there for us while we picked up some appetizers and a glass of wine (on the house, how nice!). They had basa fish served with mango salso which sounded like my dream meal. Back home, I had a lot of basa for dinner and I quite liked the fish. It is not very popular in Canada, so I was surprised seeing it at Wolf island. The dish came out quite nicely decorated, but tasted bland. I think they did a quick batter on the fish, couldn’t figure out why. I hate battered fish. If they wanted to add a bit flavour on it, they could have done a sauce or marinade. Failed! 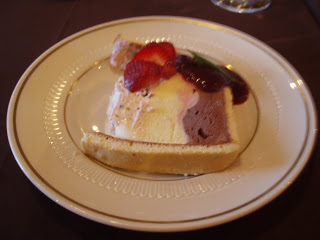 Dessert was Italian-style ice cream, served with a thin bread crust around it. The server couldn’t pronounce the name of it for me, so I had no idea what it’s called. On the way out, I checked their regular menu and was kinda shocked. Their entres ranged between $25 and $40, quite a price to pay at an island restaurant like this, if you asked me. And if the food was fabulous, I could understand when people are willing to pay, but it was meh. Oh well, the meal was paid for, so I can’t complain.

Tonight was Canada Day boat cruise and fireworks. The conference was long without enough breaks, I wanted a nap so bad. They made me come downstairs for the bus at 5:30 which didn’t leave me much time to even freshen up. Turned out, the boat wouldn’t leave until 6:30, so I wasted my time waiting around for it at the waterfront. I have to rant. Planning was poor, as we left the center too early, and the cruise was supposed to be 3 hours long. Way too long for such a long day like this. Too late to turn around. We cruised around Thousand Island area (there were supposed to be 1800 islands all together, I didn’t count, lol), having a few appetizers and anxiously waiting for the food. 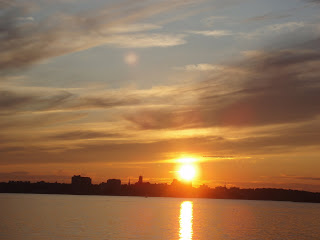 There were like 300 people on that boat, so obviously dinner would take a long time to be prepared. I chose pork tenderloin with a grainy mustard crust. Let’s just say it didn’t actually come out that way. Well, at least I enjoyed the conversation at the table and got to know a few more people. The fireworks were meh as well – I have seen better ones, and took too long of a wait. I guess they changed the time to 9:30, as it was still too bright at 9. By the time the boat turned around to get back, and the bus took me back to the conference center, it was 11pm. It was a long night. The sunset was probably the only positive thing about the night that I embraced. Picture taken on the top balcony of the boat.

Hope you all had a fun Canada Day. Thanks for stopping by.