It has been memorable for Canada this weekend. Saturday, we won men curling GOLD, and last night, we won men hockey GOLD. With that, we broke the record for most gold medals won at a single Olympic Winter Games – 14. 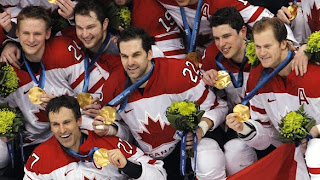 I wasn’t a hockey fan but couldn’t help watching the game with my bf. It was heartbreaking at the last 30 seconds of the game when the US tied the game. And then it was groundshaking when Sidney (our proud native Nova Scotian) scored! I was speechless. It was an amazing feeling. Twitter was filled with messages of love for the country and the team. I was laughing when I saw “Canada is closed until 9am Monday. Please don’t call as we are busy cheering for the boys”. Quite a few main streets in large provinces were closed last night to vehicles for people to celebrate. I have never seen the country like this.

I enjoyed the Opening ceremony, but for the first week, Canada wasn’t doing so well and I lost interest in watching the Games. The last few days, however, were so intense. Canada now “Owns The Gold Podium”. Watch a few of these videos with me, if you haven’t already seen them, as a way to celebrate and show my appreciation to this country and its athletes.

– The Canadian Olympic Experience. I’m teary over this video.

I love the Closing Ceremony as it was hilarious. They brought out all the famous Canadians.

Fun facts: According to the Guide to Becoming an authentic Canadian that Canada Place produced for visitors of the Games: You have to:

(1) know your Canadian icons:
– the beaver
– maple leaf
– Canadian goose and moose
– Mounties
– loonies and toonies
– bears, and
– the toque.

(2) eat and drink like a Canadian – involves maple syrup, beer, lobster, poutine, Canadian bacon, salmon and donuts.
Tip: If you are in Canada, it’s BOBO poutine (today only) at New York Fries to celebrate the gold medal of men hockey. Go to @NewYorkFries on twitter to see the link to the coupon.

(3) talk the talk, with good manners – polite and apologetic.

Ok, I’m done bragging (a little bit) about my country, my home 🙂 I have a fun littlel haul coming up later today. Have a lovely day, everyone!