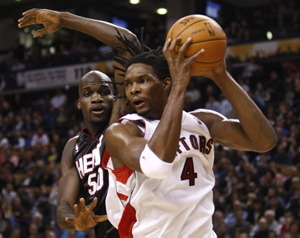 The NBA regular season is less than a quarter way through but we’ve already had the opportunity to see a sampling of what Canuck ballers are capable of.  Not only do we have the lone Canadian NBA franchis in the league, the Toronto Raptors, but we also have a handful of  Canadians balling south of the border.

Toronto Raptors
Record: 7W-12L
Welcome to the roller coaster we like to call the Toronto Raptors.  So far this year’s Toronto Raptors have shown glimpses of greatness and then glimpses of mediocrity.  First off, the Raptors are one of the top offensive teams in the NBA averaging 104.9 ppg.  With a starting five that includes the likes of Hedo Turkoglu, Chris Bosh, Andrea Bargnani and Jose Calderon, they’ve definitely have some offensive weapons that can shoot the ball.  So all this offense is impressive, right?  Well, on the other side of the coin, the team is also one of the worst defensive teams in the league, where opponents are averaging 109 ppg.  And the latest trend has been their struggle to compete in the second half of contests.   Although the Raptors have added a defensive-minded coach, Marc Iavaroni and some defensive stoppers, Antoine Wright and Reggie Evans, the Raptors have failed to display that  they can stop teams.   So we’re 19 games in,  and this team is struggling to find their identity with nine new faces on the roster.

The highlights from this Raptors’ team?

Steve Nash, Phoenix Suns (Victoria, BC)
16.4 PPG, 12.1 APG, 2.7 RPG
The Phoenix Suns lost Shaquille O’Neal to free agency in this past offseason but apparently it’s been nothing but a blessing for the Suns.  The Suns are running again, with 35 year-old, Steve Nash leading the way.

The Suns sit at the top of the Western Conference with their 14-3 record and have been one of the biggest surprise teams so far.  With veterans like Nash, Grant Hill and Jason Richardson, the Suns are proving their doubters wrong.  Nash has been outstanding and already has two 20-assist games this season.

Joel Anthony, Miami Heat (Montreal, QC)
2.2 PPG, 2.6 RPG, 1.3 BLKS
The 6-9 backup centre has been putting in quality minutes for the Heat, playing behind starting centre (and former Raptor) Jermaine O’Neal.  Anthony recently made a visit to Toronto when the Heat played the Toronto Raptors on November 20th.  While in the city, he participated at a Canada Basketball event promoting the new Canada Basketball t-shirt collection.

Jamaal Magloire, Miami Heat (Toronto, ON)
0.0 PPG, 1.0 RPG
"Big Cat" has played in only one game in 5 minutes of action  for the Miami Heat.  The former All-Star was brought onto the team to provide centre experience and veteran leadership for the Heat bench.  He has recently been in the news as he is considering putting on the Canada jersey to help the Senior Men’s national team at the World Championships in Turkey next year.

Samuel Dalembert, Philadelphia 76ers (Montreal, QC)
6.3 PPG, 7.7 REB, 1.9 BLKS
Dalembert returned as the Sixers’ starting centre this season doing what he does best, grab rebounds and block shots.  Dalembert had a season-high six blocks on Friday in their loss to the Atlanta Hawks.  The Sixers have been a disappointing 5-13 this year and are rumoured to be looking to sign the so-called "retired" Allen Iverson.