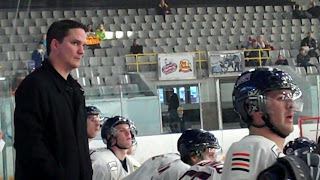 Troy Ryan may have solved his team’s lack of scoring prowess with one simple move; the acquisition of Brendan Taylor.
Just last week the Lions were one of the lowest scoring teams in the league. Travis Perry was the team’s leading scorer with a dozen points, while most of the other teams in the MJAHL had 4 or 5 players in the twenties or high teens.
Enter Brendan Taylor.
Since joining the team last week, the former Gatineau Olympique has been the focal point of a Lions offence that literally scored at will vs. visiting Campbellton on Sunday afternoon.
Taylor has 9 points in the three games, including a six point game vs. the Tigers that featured his first career hat trick.
Taylor has also lit a spark under the Lions big left wing sniper, Kyle Dilosa. Ryan has Taylor on a line with Dilosa and Justin Belanger, and Dilosa has turned into a one man wrecking crew.
Seemingly frustrated and underachieving prior to Taylors acquisition, Dilosa went on a tear this past week, compiling 3 goals and 3 assists while looking dangerous on nearly every shift. Dilosa had so many chances on Sunday it’s a mystery he only scored once.
Taylor’s presence seems to have installed confidence throughout the entire line up. The line of Perry, Robbie Veriker and Wayne Bedecki seem much more comfortable as the #2 combination, while third liners like Andrew Wigginton and Chris Riguse had multiple point games on Sunday.
Two of Taylor’s goals were so impressive that the crowd’s reaction was more of a “jaw drop/what did I just see” reaction rather than a boisterous rise of applause. As the Lions scored their 8th goal halfway through the second period, even Lions fans seemed to feel agony for the struggling Tigers team. Campbellton dropped to 3-18 on the season with the loss.
The Lions improved to 8-10-2 on the season, 8-7-1 in their last 16 games, and just 3 points out of fifth place in the Bent division.
Lions’ fans are starting to get excited for the upcoming rematch with the nationally ranked Woodstock Slammers. The Slammers are 20-0-1 on the season and just cracked the Top 10 rankings in Canada. The last time the Slammers came to Halifax, they barely escaped with an overtime win off a goal from leading scorer Brogan Bailey. Woodstock will be in Halifax for the rematch on Thursday, December 17 at the Forum.
In the meantime, the Lions will try to extend their winning streak to 3 this Thursday, December 3rd, vs. the Dieppe Commandos at the Forum. The Commandos are 7-15-2 for 4th place in the Meek Division. Game time is 7:00.
News and Notes
Defenseman Michael Rosky is back with the Lions after spending time with the Quebec Ramparts in the QMJHL. Lions’ defenseman Ian Saab is back in the Q, he rejoined the Cape Breton Screaming Eagles last week…..Congratulations to SMU Huskies Head Football Coach Steve Sumarah. Sumarah was selected as the CIS Coach of the Year for 2009, earning the 4th year coach the prestigious Frank Tindall trophy last week in Quebec City. Coach Sumarah has been a regular on my radio show, CKDU Sports, and was also on Haligonia Sports during the Tall Ships Festival. Forthcoming, honest, and genuine, the Coach is always an outstanding interview and a class act. Sumarah will add the award to his trophy shelf beside his 3 AUS Coach of the year awards. The Coach will tell you he would trade them all in for a trip to the Vanier Cup I’m sure, but the award is well deserved regardless…..The AUS and QIFC have negotiated an extended deal for interlock football through 2012. The deal will see each AUS team get 1 interlock game a year, while each Quebec team gets 2 games total through 2012. The contract has to be a disappointment for the conference, as the previous contract stipulated 2 games a year for each team. However, considering there was talk of Quebec walking away from an extension, the AUS has to be pleased. Next season we finally get a Laval/SMU game. The Rouge et Or will visit Huskies Stadium on September 18 for a game that will be one of the premier sporting events in Halifax next fall. The AUS conference will still have an 8 game schedule, with two teams having to play each other 3 times. Yikes!………Rogers is giving away 10000 Halifax Rainmen tickets for their exhibition opener on Dec. 19 at the Metro Centre (see haligonia.ca homepage). Halifax Rainmen home games will be shown all season long on Haligonia.Ca. The regular season starts in early January…….Do you know who the 13th Rider was? There were reports that it was Jason Armstead, the returner in the endzone in case of a missed field goal. This assertion is ridiculous, as the Riders would have wanted a return man back there to bring the ball out in case of a miss. The game was 28-27, and a team can get 1 point on a missed field goal if the ball clears the end zone or is not returned past the goal line. Chances are very good that we’ll never know who the 13th Rider was, and that it was a coaching mistake. But it will be fun to hear the conspiracy theories as time goes on. Personally, I’m going to wait 5 years until things cool down, and then I’m moving to Saskatchewan to write a book. The title: “The Unsolved Mystery of the 13th Rider.” Follow me on Twitter, just search Haligoniasports. Please email me at bill@haligonia.ca.