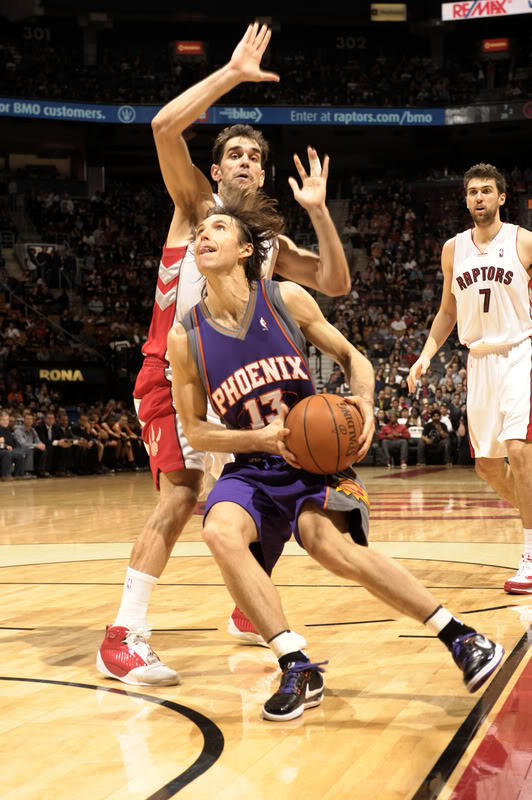 Toronto Raptors
Record: 9W-13L (Last week: 2W-2L)
I told you this team was a roller coaster. Last week, the Raptors dropped two games: one to the lowly Washington Wizards (102-106) which followed up with an ugly, and I mean UGLY blowout loss to the Atlanta Hawks. The Raptors let the Hawks score 146 points and showed little effort on both ends of the floor. This caused a media frenzy as players were calling out the coaches and teammates for the lack of effort and intensity after the loss. This sparked the need for a closed-door team meeting before Friday’s rematch against the Wizards, addressing the team’s recent challenges.

Whatever took place in the meeting yielded positive results. The Raptors came out energized with an improved defensive intensity as the Raptors defeated Gilbert Arenas’ Wizards in OT. On Saturday, in the second game of a back-to-back (where the Raptors have struggled this season), the Raps came out guns blazing, blowing out the Chicago Bulls in Chicago 110-78.

· Chris Bosh continues to lead by example, putting up 20-10 stats on almost a nightly basis.  After a 2-point showing against the Hawks, Bosh bounced back with a 31-point/16 rebound performance in the win against the Wizards
· Mr. Clutch, Hedo Turkoglu started to live up to his name in their win over Washington nailing the game-winner with 8.1 to play in OT
· The rook, DeMar DeRozan, is starting to flourish and is playing more aggressive, slashing to the rim and has already put together a nice collection of highlight reel dunks

Steve Nash, Phoenix Suns (Victoria, BC)
17 PPG, 11.1 APG, 2.6 RPG
(Last week: 19.5 ppg, 7.3 APG, 2.5 RPG)
Steve’s Suns have started to make way back down to Earth, dropping three of their last four games failing to compete with the big guns, the Cleveland Cavaliers and Los Angeles Lakers. It was only a matter of time that these Suns would cool off from their hot start. The Suns even struggled against their former coach, Mike D’Antoni and his New York Knicks, losing 126-99.

In their lone win last week against the Sacrmento Kings, Nash put up a season-high 32 points.

On another note, Steve Nash and teammate, Amare Stoudemire put out their one minute film entitled…..well, I’ll just let you watch it yourself.

Jamaal Magloire, Miami Heat (Toronto, ON)
3.7 PPG, 3.0 RPG
(Last week: 5.5 ppg, 4.0 RPG, 0.5 BLK)
Magloire was thrown into the rotation last week, picking up minutes against the Denver Nuggets and the Los Angeles Lakers last week. The Toronto native put in a season high 15 minutes against the Lakers to help match up with the Lakers’ bigs.

Samuel Dalembert, Philadelphia 76ers (Montreal, QC)
6.0 PPG, 7.5 RPG, 1.9 BLK
(Last week: 4.0 PPG, 9.7 RPG, 1.7 BLK)
Slammin’ Sammy can look forward to playing with a former All-Star teammate, as Allen Iverson has made his return to the Philadelphia 76ers. Iverson made his debut Monday against his former team, the Denver Nuggets.

Dalembert continues to do the defensive dirty work and had a monster game against the Dallas Mavericks. He finished with 6 points, a whopping 19 boards, 3 steals and 3 blocks.