Finally confirmed The Canteen is moving to 22 Portland St. Where the Sun Sun used to be, Renee will be adding dinner and brunch. To help with the startup, there is a Kickstarter with some awesome donation perks. I’m tempted to go for the create your own sandwich. Maybe I should crowd fund to crowd fund?

Meanwhile, up the other end of Downtown Portland St where it meets Prince Albert, Cardboard went up on the windows and all it’s says is “Coming Soon” “Much Fun” “Good Times.” When I figure it out, I’ll let you know

Tis’ the Season patios are all rolling up, the summer season is done. Stillwell wrapped up their Beergarden last night, and Stubborn Goat closes their Waterfront location today.

Hooked is now open on Charles St. Looking forward to having a fishmonger again.

Duly Noted as completed their move from Brenton St. to their new larger home on Doyle St.

This is kind of interesting. Costco announced 7 new Canadian stores (none in Maritimes), but they are opening their first “Business Centre” store in Scarbrough it will be about 2/3 the size of a current store and service small business with “a wider selection of business-oriented merchandise and services” and doing away with consumer sections like toys, in-store bakery, and clothing.

A Tim Hortons outside of Brantford ON. I know big deal a Tim’s, but this one is on a First Nations reserve, and therefore it’s 8% cheaper.

Danier has re-launched in a few Ontario Malls, they have a new owner, new business model. Why keep the Danier name?

and the Halifax Pop Explosion is this week http://www.halifaxpopexplosion.com/

If you like the look of old department store BlogTO has a post up about some classics in Toronto http://www.blogto.com/city/2016/10/what_department_stores_used_to_look_like_in_toronto/

Christmas Creep in full effect at the Sackville Superstore 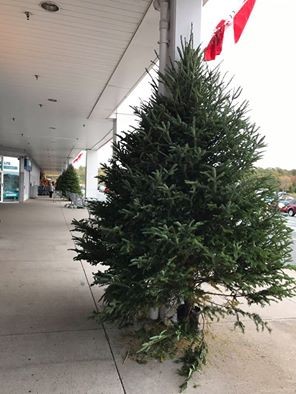